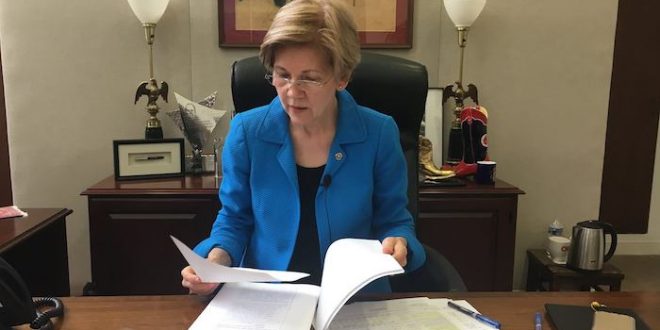 Making a pitch for her party with less than two months to go until a crucial midterm election, Warren outlined a list of congressional priorities if Democrats find success at the ballot box and attributed failure to approve sweeping child care investments to the U.S. Senate’s existing 50-50 split.

The Cambridge Democrat told business leaders at a New England Council breakfast that she did not “come here to be partisan, but there are certain partisan realities we just have to acknowledge.”

“The reality is the Republicans will not let us pass a bill to permit more people to vote, to permit access for American citizens to be able to vote,” Warren said in a lengthy response to a question about encouraging students to register to vote and the prospect of voter suppression.

“My own view on this is that’s what 2022 is all about: if the Democrats are able to hang onto the House and if we can get two more senators in the Senate who are willing to roll back the filibuster for this, then the pieces start to click in the other direction,” Warren added.

The U.S. House approved a major elections overhaul this term, seeking to require automatic voter registration, rein in voter ID laws at the state level, limit purges of voter rolls and take other steps Democrats tout as crucial to protect access to the ballot.

But the bill died in January in the Senate, where Republicans blocked its initial move toward passage and Democrat Sens. Joe Manchin of West Virginia and Kyrsten Sinema of Arizona opposed lowering the 60-vote filibuster-proof threshold to the 50-vote margin Democrats currently hold.

While Warren called for adding Democrat senators who support eliminating the filibuster, she aimed her criticism more at Republicans.

“One political party has thrown in with not only the Big Lie of 2020 but the whole notion that purging voter rolls, keeping people from standing in line to try to vote, keeping old voting machines so the lines get longer in poor neighborhoods so people get discouraged from voting — all of those pieces have become the policy of one political party,” she said. “We get a robust voting rights law, not even the one we talked about earlier.”

She named two other top priorities for Democrats if they retain control of the U.S. House and expand their 50-seat Senate caucus: abortion access and gun control.

“There’s some other clicks right behind (voting rights). If Democrats get all of those things, we will make Roe v. Wade the law of the land,” Warren said, referencing the 1973 U.S. Supreme Court decision enshrining the right to an abortion that was overturned in the court’s Dobbs v. Jackson case in June. “And I can keep going on this, but I will mention one more: we will do more on gun safety. It is our obligation to keep our children safe.”

Warren criticized Congress over failing to revamp government investment in child care, saying lawmakers “failed miserably” to address an issue critical to both employers and employees.

“We had 49 Democrats ready to make that investment in our kids, but with no Republicans, we just literally couldn’t get the job done,” Warren said. “This is a fight I will stay in. We can do roads and bridges and chips and broadband to help our workers be more productive, but I believe we can and we must also include child care. Child care is infrastructure.”

Retaining trifecta control would represent a major victory for Democrats, with midterm elections historically representing a sizable challenge for the party that holds the White House.

Every member of Congress from Massachusetts — Warren, fellow Sen. Ed Markey and all nine members of the House — is a Democrat. Eight of the nine representatives face Republican challengers this fall, though their odds are long: Massachusetts voters have not elected a Republican to the U.S. House since Peter Blute and Peter Torkildsen won in 1994.

Several members of the delegation — which President Joe Biden last week called “the most powerful and most talented delegation, I think, in the country” — serve in prominent leadership positions, including Assistant House Speaker Katherine Clark and House Ways and Means Committee Chair Richard Neal.

The November elections will effectively determine whether they will continue to wield enormous decision-making power as members of the majority’s leadership or instead shuffle into roles atop the minority party hierarchy.