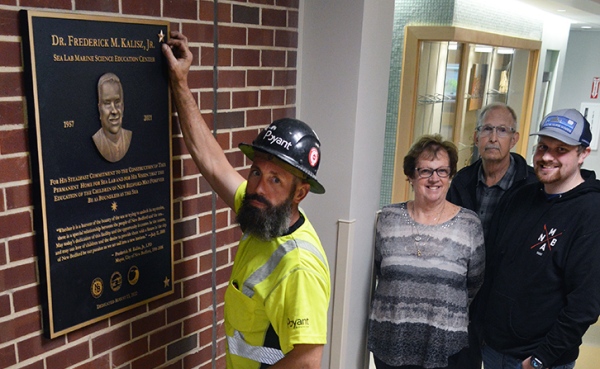 Mrs. Patricia Kalisz along with her son, Rick Kalisz III, were on hand for the installation by workers of the plaque, which had been delayed due to supply chain disruptions. The plaque finalizes the Dr. Frederick M. Kalisz, Jr. Sea Lab Marine Science Education Center, which included the unveiling of an exterior sign during an August 13 dedication ceremony that attracted 450 attendees.

At the August 13 event, Mayor Jon Mitchell noted Sea Lab’s dedication had the unanimous support of the New Bedford School Committee and City Council. Of Kalisz, Mayor Mitchell recalled, “he was always in motion; he never stopped exerting himself in service to others, the city and everyone who lived in it. He strove over his four terms to activate the city’s potential every single waking hour.” 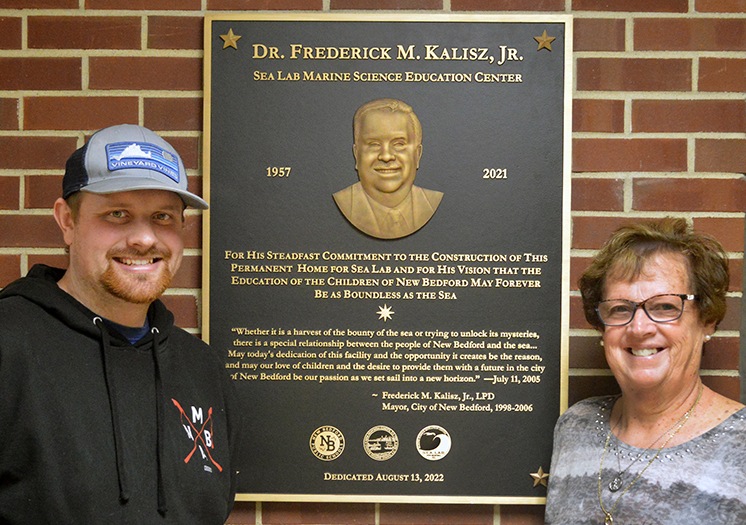 George Leontire, who served as city solicitor during the Kalisz years, noted the Dr. Frederick M. Kalisz, Jr. Memorial Scholarship has begun awarding scholarships to New Bedford students. In the care of the SouthCoast Community Foundation, the scholarship fund continues to accept donations from the public, he said.

Dr. Joseph Costa, Executive Director, Buzzards Bay National Estuary Program announced that over the next two years his program “will be providing $50,000 to Sea Lab. Most of these funds to be used to pay tuition for students in financial need and promoting equity of access, with the remainder of the funds to buy equipment and supplies, pay for fieldtrips and fund special projects.”