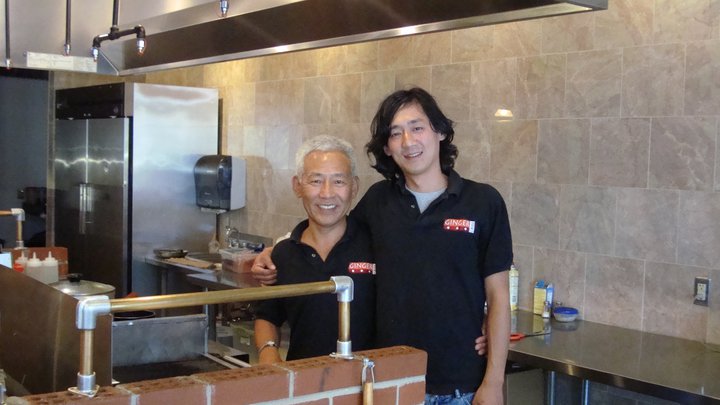 We bowed three times. It didn’t feel like enough to me.

There was a huge crowd at the Ginger Grill Sunday afternoon.  Friends and family of Jay Ghim gathered in one place (actually two places- the crowd spilled over into the Pour Farm Tavern) to honor the man and say goodbye.  The turnout was a testimony to his greatness.  And what made him so beloved?  I think we all admired his spirit.  God knows there could not have been a happier man in New Bedford, or anywhere on earth.  His was an incredible talent for hospitality.

We bowed three times at the small shrine set up at the rear of the dining room at the Ginger.  JT had instructed us in the tradition.  At first it seemed inadequate, but there was a resplendence to it that was inescapable.

Anyone who ever lunched or dined at the Ginger Grill could testify to that.  The first time I ate there, I must admit I was a bit taken aback by Jay’s big personality, but after a few seconds I realized that his was a genuine joy, a love of life, a passion to serve his customers far beyond the call of duty.

Some of the comments I’ve heard over the past few days:

For what more can a man ask?  I’m reminded of the inscription written in the copy of Tom Sawyer left by the angel Clarence in the last scene of “It’s A Wonderful Life”:

Remember no man is a failure who has friends.

Thanks for the wings!

My last chance to say it: Thanks Jay, for the pleasure of having known you.

Jay Ghim passed away January 23, 2011.  He is survived by his two sons, J.T. and Jason, and his long time partner Mina.  He also has three brothers and two sisters in South Korea.  You can read more about Jay’s life in NBG’s previously published Ginger Grill article.