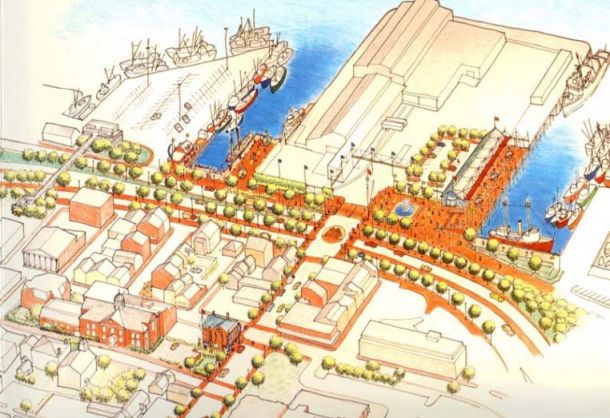 The City of New Bedford and the Department of Public Infrastructure recently presented the design plans for the second phase of the Route 18 reconstruction plan.

The construction of the first phase, which included much needed aesthetic improvement and efficient re-routing of traffic in the Union and Elm Street area of Route 18, was completed just recently in November. That project fixed bottlenecking issues present at at Route 18 intersections and converted Elm and Walnut Streets to four-way intersections while creating a more appealing, tourist-friendly appearance that was intended to provide a boost to downtown businesses.

The second phase will revamp the section that spans between the Union Street intersection and Cove Street in the south end of New Bedford. Much like the first phase of the project, this will bring beautiful bluestone crosswalks, brick sidewalks, and more pleasant landscaping to the currently dreary stretch of highway. The pedestrian overpasses, regarded by many as eyesores, will be taken down and replaced with more crosswalks throughout the roadway.

The re-invention of the roadway is part of the larger John F. Kennedy Boulevard project. Gone will be the days of Route 18 as a highway, where cars often travel well over the speed limit, and in will come a more aesthetically pleasing, gradual roadway. Despite the change, a commute from one end of Route 18 to the other is only projected to add a minute or so to travel times.

The project is going to be heard at a public meeting in New Bedford hosted by the Department of Transportation, likely within the next month. Public Infrastructure Department Head Ron Labelle projected the beginning of the project to come in the Spring of 2014. The plan is the product of Ron Labelle and his team, several different mayoral administrations, and especially south end community and business leaders and City Councilor Joseph Lopes.