I was cautiously optimistic about “Red Tails” on my way to see it- the trailers had given me mixed expectations. One featured sweeping music and inspiring speeches, while another featured dozens of explosions backed by “Transformers” style dubstep music. It looked like Peter Jackson and Michael Bay were fighting over the editing room. However, when the lights dimmed, I was greeted with a painted-on 1940’s-esque title over a beautiful aerial shot. This anachronistic war film was a pleasant surprise. It tells the incredible true story of the Tuskegee airmen, the first unit of black fighter pilots to serve in the U.S. military.

“Red Tails” is best described as a time machine, in almost every sense. It entered the cinema scene in a cloud of racial controversy. No studio was willing to fund or even distribute a major film with an all-black cast, even one written by George Lucas of “Star Wars” fame. The famous director was forced to put up the film’s entire $58,000,000 budget himself. This kind of subtle racism in business deserves its own article- it’s simply not something we expect in this day and age.

The look, tone and dialogue bring “Red Tails” even further back in time. Despite incredible special effects, a much grainer version of this film wouldn’t be out of place in the war years. I half expected a young John Wayne or Robert Mitchum to stroll onscreen at any moment. The pilots spout cheesy clichés in their cockpits, seemingly unaffected by gravity as they roll, swoop and dive. The corniness is clearly intentional, and not unpleasant, but it can be jarring in this era of movies that take themselves so seriously. Other than the casting, “Red Tails” is strongly reminiscent of propaganda films like “Flying Tigers” (1942). The dogfights themselves are exciting and visceral- though much less gritty than some other modern war films.

The ensemble cast is excellent- a perfect mix of familiar faces and newer talent. Terrence Howard and Cuba Gooding Jr. give good supporting performances which are marred somewhat by the intentionally stilted and corny dialogue. The principal characters are a fighter squad of four played by Nate Parker, Tristan Wilds, David Oyelowo and Elijah Kelley. Without leaving the vintage tone of the film, they provide very good dramatic performances and avoid a stereotypical ‘war buddy’ shtick. Most of the relationships feel broken-in, like they existed before the movie began.

This is where one of the film’s flaws comes in; the viewer feels like they’re being dropped into the story halfway through. Constant allusions are made to the struggle to get the Tuskeegee program off the ground, yet we join the airmen in the skies over Italy. That previous story could have been better than “Red Tails”, not to mention Oscar material. Another Cuba Gooding Jr. movie, “Men of Honor” (2000), tells a similar tale- and manages to be a great dramatic film with little to no real violence. George Lucas has once again shown his preference for action and entertainment over dramatic weight. Neophyte director Anthony Hemingway’s influence is not really felt; the billionaire creator of “Star Wars” and “Indiana Jones” has put his stamp all over this flick. 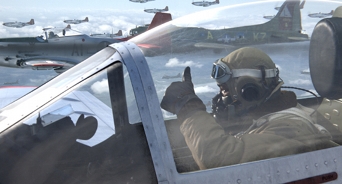 The vintage feel of “Red Tails” is refreshing, but it really does take you out of the movie when you have to roll your eyes at some corny line. There is a reason that filmmakers have moved away from this style. The villain is unconvincing and feels tacked-on to the plot, a scarred German ace who somehow fights the main characters in every battle. This is another trope of classic war films. A mix between this style and a more modern one would have produced something original, but as it stands the movie contains little real creativity.

Overall, “Red Tails” is a fun, solid, entertaining movie with a good script, great casting and decent direction. The effects are beautiful, and the battle scenes visually exceed any other modern war film. The story is interesting but lacks real depth, and the representation of war is toned down to keep a PG-13 rating. It’s worth seeing for sure, and on the biggest screen you can find. As long as you don’t expect anything revolutionary, “Red Tails” delivers. I give it a solid three stars out of five.