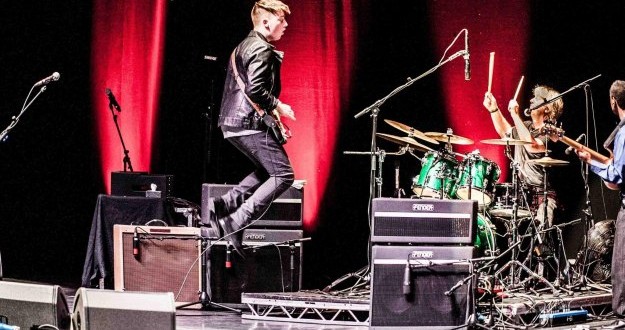 Have you heard the name Quinn Sullivan? If you haven’t, he is likely the most famous person you’ve never heard of. If you have heard of him, you’re likely astounded that people haven’t.

Blues, pop and rock guitarist Quinn Sullivan was born and raised in New Bedford and has been playing guitar for 14 years and accompanied giants in the world of music . He has played onstage with B.B. King and even gigged at B.B. King’s own “B.B. Kings Blues Club” where he was allowed to play King’s famous “Lucille” guitar. He’s jammed with the likes of the Jimi Hendrix Experience, Eric Clapton, and the Foo Fighters. He was pulled on stage by Buddy Guy when Guy played at the Zeiterion Theater which led to an appearance on Buddy Guy’s Grammy-nominated album Skin Deep and a subsequent opening slot in Buddy Guy’s domestic tour.

He’s been featured on the Jimmy Kimmel show, Tonight Show with Jay Leno, the Ellen DeGeneres show, The Today Show, and Oprah Winfrey. He’s played at the Orpheum Theatre in Boston, the famed Madison Square Garden, and the mecca for genuine blues, Buddy Guy’s Legends. Festival? Lollapalooza, the Montreux Jazz Festival, the Austin City Limits Festival and the Crossroads Guitar Festival. He’s recorded three albums, Cyclone in 2011 and Getting There in 2013, and embarked on a tour to promote his most recently recorded album, Midnight Highway. He’s played to tens of thousands of packed, sold-out arenas.

Now, what if I told you that this experienced, talented veteran started doing these things at 3 years old – beginning with the beloved Toe Jam Puppet Band – and that he is now only 17 years of age? You’d be shocked, right? It’s not only true, but you can have the opportunity to enjoy his talent right here in our own backyard and Sullivan’s hometown, at the New Bedford Whaling Blues Festival on August 13th!

It’s easy to understand why Quinn found out so early what his life’s passion was: his parents were lovers of live music and festivals and brought Quinn along with them since he was an toddler. As soon as he was able to, they placed a guitar in his hands to make him really feel a part of the experience.

Because he was constantly listening to music at home and watching videos of performances, he came across what Buddy Guy was doing and became enamored and awed. When Buddy came to New Bedford to perform at the Zeiterion Theatre, Quinn’s dad did everything possible to make the two meet backstage and get an autograph on one of his son’s guitars. Buddy made a deal: that he would only do that if the 7 year old would come onstage and perform with him later in the evening!

The two have become fast friends ever since and the experience propelled Quinn’s aspirations to make a career out of writing music and performing. It has been his life’s mission for as long as he can remember.

His third album, Midnight Highway, recorded in Nashville’s famous Blackbird Studio is the most “Quinn” album to date. While he recorded the album with his regular backup band – guitarist Rob McNelley, Reese Wynans on keyboards, and bassist Michael Rhodes – he has had more creative input than he previously. In addition, he feels that he has matured not just in his playing and composing, but physically as well: he is post-pubescence so his voice has made its change and “settled” in. The tracks that he is most proud are “Lifting Off,” “Going,” “Eyes For You” and George Harrison’s “While My Guitar Gently Weeps.”

He is hoping that this album will be his breakout album and since he is no longer a child and now a young adult, one that will make people take him seriously. And if the release of the album doesn’t convince everyone, his third appearance at the Montreux Jazz Festival, and tour to promote the album, will display a work ethic that will make people take note – pardon the pun. Sullivan has dates across the country in New York, New Jersey, Delaware, Pennsylvania, Massachusetts, and even Europe in places like Paris, Rotterdam and Zurich.

If you want to see why he has played in so many venues, with so many world talents, and skyrocketed to the top so fast, you will get your chance at the outdoor New Bedford Whaling Blues Festival presented by the Zeiterion Performing Arts Center, Saturday August 13 at the scenic Fort Taber Park from 11:45am-7:45pm.

The festival which began in 1998 by music enthusiast Sean Moriarty was created as a way to have something positive going on in the city. When over a thousand people showed up for the inaugural event in torrential rains, he knew that he was servicing the community and giving them something they wanted.

In spite of this and because life has its way of interfering, the festival disappeared and was thought to be a done deal. Now after ten years without an event, the New Bedford Whaling Blues festival has partnered with The Zeiterion to bring the event back bigger and better.

Many world famous and locally famous acts will showcase their talent. Kenny Wayne Shepherd, Jon Cleary and The Absolute Monster Gentlemen, Shemekia Copeland, Johnny Hoy and the Bluefish, Neal McCarthy, Shipyard Wreck, and Craig DeMelo and many more will make appearances. You won’t want to miss out on this event!

If you would like more info on Quinn Sullivan”s tour visit his page dedicated to it. If you are interested in purchasing his music, you can do so at his store.

On the day of the event, the New Bedford Whaling Blues Festival Box Office is open on at 10:00am. Gates open at 10:45am. Festival attendees may bring blankets and low-backed beach chairs (under 30”). The designated seating area at the Fort Stage is on a first-come, first-served basis. The Local Stage is on the side of the Main Stage and general admission as well. Arrive early in order to set up camp for prime viewing, make friends with your neighbors and squeeze the most fun out of the day!

When Joe isn't writing, he's coaching people to punch each other in the face. He enjoys ancient cultures, dead and living languages, cooking, benching 999#s, and saving the elderly, babies and puppies from burning buildings. While he enjoys long walks on the beach, he will not be your alarm clock, because he's no ding-a-ling.
Previous Targeted Ground Spraying for Mosquitoes Planned in New Bedford
Next The South Coast Hot Jobs List – 4 August, 2016