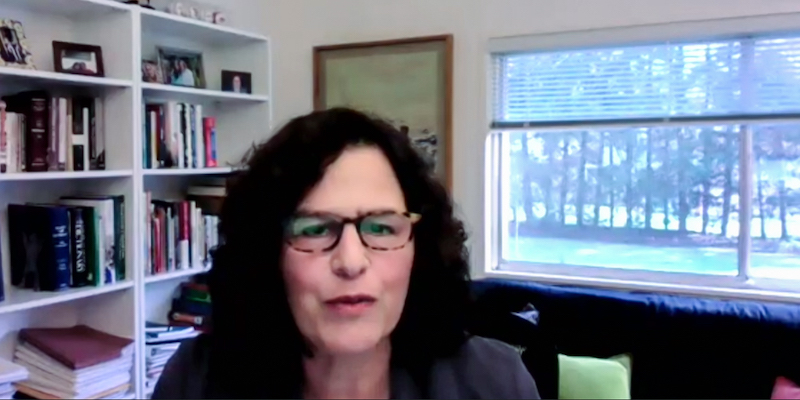 Wendy Wayne, director of the Immigration Impact Unit for the Massachusetts Committee for Public Counsel Services, is a member of the national Public Defenders Coalition for Immigrant Justice, which released its 10-point immigration policy plan on Wednesday. [Screenshot]

A coalition of public defenders from across the country is calling on the incoming Biden administration to adopt a 10-point immigration policy plan to reverse what they say are “unjust, harmful, and destructive tactics” used by the Trump administration.

The plan, announced at a virtual press conference Wednesday, includes redirecting funding away from Immigration and Customs Enforcement Agency to legalization efforts, ending immigration detention practices, and establishing a federally funded universal representation program. Over 30 public defender organizations from 14 states signed onto the plan, including the Massachusetts Committee for Public Counsel Services, an organization that provides legal representation for those unable to afford an attorney.

With President-elect Joe Biden set to take over the Oval Office on Jan. 20, members of the Public Defenders Coalition for Immigrant Justice have met with transition advisors and received “very positive feedback.”

“We’re very excited at the possibility of what can come in this coalition,” said Raha Jorjani, managing attorney of the Immigration Representation Unit, Almeda County Public Defenders in California. “This is a coalition of public defenders, we’re going to do what public defenders do best, which is to hold the government accountable for basic human rights principles. And so far, we have received a warm welcome on this agenda.”

Wendy Wayne, director of the Immigration Impact Unit for the Massachusetts Committee for Public Counsel Services, said the separation of immigrant families still occurs for parents with minor criminal histories.

Last year, she said, she helped a father fleeing from another country with his three-year-old son. The son “was literally ripped from his father’s arms when he entered the U.S.” and the father was held in immigration detention in South Texas while the son was taken to a shelter in upstate New York.

“This separation was based on motor vehicle offenses from 15 years earlier that were irrelevant to the father’s ability to be a good parent,” she said during the press conference. “The Trump administration use these immigration laws to demonize immigrants with any criminal histories and detain and deport them, regardless of even the most sympathetic mitigating factors.”

Immigration reform efforts in Massachusetts authorizing driver’s licenses for undocumented immigrants and curtailment of interactions between local law enforcement and ICE again failed during the 2019-2020 session on Beacon Hill. A push to include the driver’s license proposal in a wide-ranging economic development bill ultimately failed last summer after Rep. Christine Barber pulled an amendment adding the measure to the legislation.

The Public Safety and Homeland Security Committee reported the so-called Safe Communities Act (H 3573 / S 1401) favorably in mid-July but the legislation stalled out in each branch’s respective Ways and Means Committee.

As for the national plan, the coalition asks that the Biden administration establish a one-year moratorium on deportations for all detained immigrants on the first day they take office.

The coalition also advises the administration to cease immigration enforcement during the moratorium period, suspend routine check-ins with ICE, and avoid the initiation of removal proceedings and referral for prosecution of any charges of illegal entry or re-entry.

“[The Trump administration] has stacked the immigration courts with partisan judges, changed regulations beyond what Congress contemplated, and authorized and re-written immigration law,” the plan says. “It will take time to ensure basic fairness in our laws, and to undo these devastatingly strict legal changes. Families should not be torn apart while the Biden Administration works to pick up the pieces from these scorched earth policies.”

The coalition’s proposed federally funded legal representation program would increase spending for public removal defense and provide funds to ensure state and federal criminal defense attorneys have the resources to provide noncitizens with advice regarding immigration consequences, according to the coalition’s plan.

Andrea SÃ¡enz, attorney-in-charge at the New York Immigration Family Unity Project, said no one should face a trained prosecutor when the stakes “are literally life and death or permanent family separation.”

“We need national leadership on this issue so we don’t leave out people who don’t live in the right place,” SÃ¡enz said. “Doing this work in detention centers, immigration courts, and criminal courts every day has allowed us to meet the real people impacted by this broken system and experience how necessary it is to change, shrink, and defund the system to reinvest in our communities.”