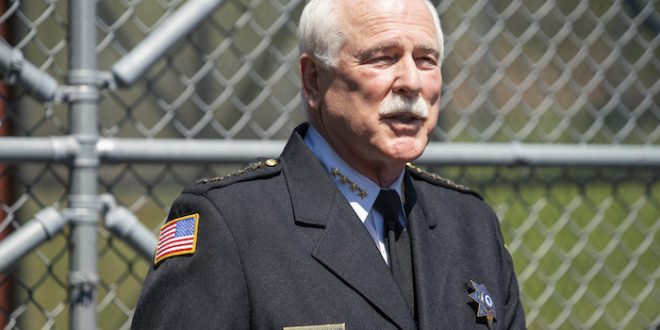 The following was submitted by Bristol County for Correctional Justice:

Over 100 people demonstrated in New Bedford this afternoon, demanding the Bristol County sheriff’s resignation. Approximately 65 protesters held signs at the Federal building in downtown New Bedford chanting, “No white supremacy in Bristol County,” and “Sheriff Hodgson’s got to go.” A group of another 50 joined them in a car caravan. The rally was called by Bristol County for Correctional Justice to protest the sheriff’s white supremacist associations, including a photograph where he’s pictured wearing a Confederate-themed tie.

“The issue isn’t just the tie,” said Linsday Aldworth of BCCJ. “Hodgson is a board member of the Federation of Americans for Immigration Reform, which the Southern Poverty Law Center has designated a white supremacist group. He’s a close associate of Stephen Miller, a White House major policy maker, with well-known white supremacist views and connections. The tie is merely a symbol of that allegiance.”

As to Hodgson’s denial that he saw no connection with the stars and bars on his tie and the Confederate colors, Marlene Pollock, also of BCCJ added, “The idea that Sheriff Hodgson, with these public white supremacist connections, chose to wear this tie without making that connection is laughable.” She continued, “When faced with multiple organizations affirming that it was indeed a Confederate-themed tie, he had two choices. To renounce and regret it or to defiantly flaunt it, insisting that he’d continue to wear it. The fact that he chose the latter course is very telling.”

The car caravan of protesters toured the city, passing the Dartmouth jails, the Ash Street jail and also historical sites connected with the area’s Abolitionist history. The caravan ended at Union and County Streets, joining the protesters who marched there on foot, where Black Lives Matter supporters have been gathering for three weeks. Organizers said they wanted to show their “solidarity and support.”