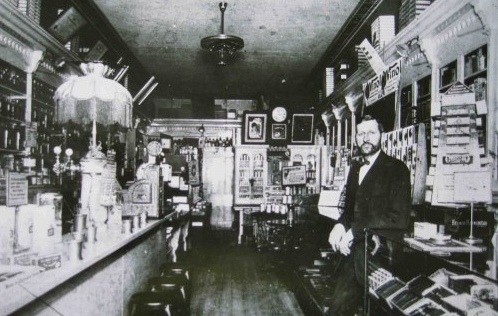 Royer's Pharmacy which opened its doors in 1879, was the quintessential pharmacy. (royerpharmacy.com)

With this new series of articles, we’re hoping to shed a little light on how things were done in the 19th century. A fun way to lend perspective to our modern way of living. We often hear “You don’t know how good you have it. When I was a kid…” or “You should clear your plate, there are starving kids in Cambodia/Ethiopia.” So this is an attempt to add images and detail to those perspectives – without the hyperbole.

When we peer back into the past and see how things were, we come to appreciate the things we have – perhaps taking them for granted a little less or no more. Of course, I will keep this is local as possible and share any anecdotes I come across in my historical research. While no one today was alive in the 19th century, this is a series on perspectives, so by all means share YOUR story on how things were in the era that you grew up in!

In a day and age where virtually everyone has a prescription and radio, TV and print is flooded with commercials and adverts for them, it’s hard to imagine a time when when it wasn’t so ubiquitous. We are clubbed over the head on a daily basis, over and again.

Before we had this monumental pharmaceutical complex called “Big Pharm,” most medicine was a mixture of magic, folk remedies and placebo. As civilization and science progressed, these methods were slowly shunned an replaced by scientific empiricism – looking for objective results and performance based approvals.

Yesterday’s shaman or witch doctor used teas, spells, herbs, plants, poultices, salves, and balms – even poison in small doses. Often placebo or coincidence was the real remedy for many of these cocktails of random ingredients.

However, every once in a while something wouldn’t just work for a tiny few, but really worked and nursed an individual back to health. These would, of course, garner the attention of the healer. As cities grew and populations with them, there began to be a financial aspect to the profession that didn’t exist before and the chemist, apothecary, and pharmacist would eventually become bonafide occupations.

When Joe isn't writing, he's coaching people to punch each other in the face. He enjoys ancient cultures, dead and living languages, cooking, benching 999#s, and saving the elderly, babies and puppies from burning buildings. While he enjoys long walks on the beach, he will not be your alarm clock, because he's no ding-a-ling.
Previous State Police Rescue Nude Man from Boston Harbor
Next NBPD and Cops For Kids donate checks for local superstar Athyn Sousa