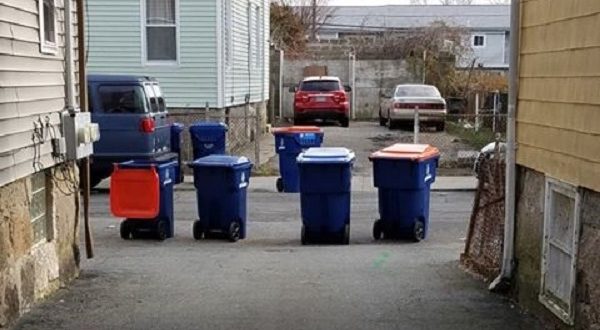 “I have a three year-issue with ABC disposal.

First of all, I would like to say that both my five-year-old child and I have severe chronic illnesses and at any moment could have to rush out to the hospital. ABC supervisors are aware of this and know our problem. They acknowledge that their workers are at fault but the workers don’t care and do what they want anyway.

Basically, the ABC drivers completely block my driveway with barrels. I put all of our barrels off to the side the night before trash pick-up. As the pic shows, my driveway is barricaded while my neighbor’s barrels are mostly off to the side. This has been on and off since my daughter was two. I contacted ABC the 1st time when I came home in the morning from physical therapy with my 2-year-old. ABC would have this barricade mess blocking my driveway (as in the photo.) I would have to stop in the middle of the street with my two-year-old, stopping traffic since I live on a one-way. Obviously, other drivers trying to get to work and their kids off to school where not happy.

I called more than a dozen times since. The barricade would stop for a little while and eventually start again. I have received a variety of excuses – new drivers, short-staffed this week, and so on. But recently the new drivers do not have a care or concern about following their company’s protocol. I’ve been dealing with their supervisor and she keeps telling me to call her if it happens again and she will personally contact them and they will lose a day of work. I have told them I have been in communication with the supervisor, but their response is that they don’t care – they do what they want and they told me to call her again and to stop making their job harder.

So basically, the rest of us have to work hard to achieve some kind of training or degree and then actually have to do our jobs to not to get fired. But at ABC, uneducated lazy workers are entitled to minimum wage pay without having to do the job right. I see tons of complaints about them on social media and was wondering how others are resolving their issues with them…. or are they being resolved at all. Is ABC telling customers they are working on the issue but really not handling it at all?” – Nicole

Have an opinion or essay to share? email info@newbedfordguide.com