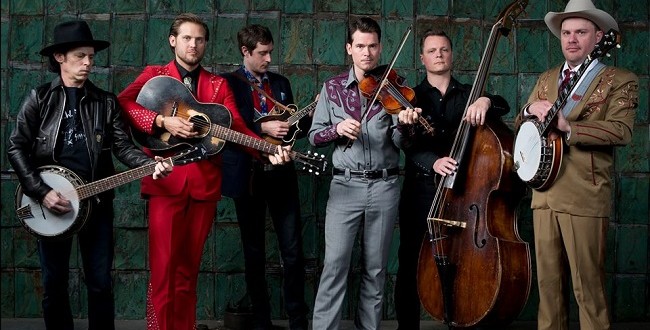 The Zeiterion Performing Arts Center presents Grammy Award winning Americana band, Old Crow Medicine Show on Thursday, September 15, at 8 p.m. This platinum-selling roots band rose to fame through endless dedication to a unique country sound that appeals to both old-school country music fans and rock audiences alike. Called “impressive with raw energy and classy musicianship” (The Guardian), these six multi-instrumentalists were inducted into The Grand Ole Opry in 2013 and have played the world’s most renowned festivals and venues. Tickets for Old Crow Medicine Show are $31-49 and are available at www.zeiterion.org, 508-994-2900 or at the Zeiterion box office, 684 Purchase Street, New Bedford.

Old Crow Medicine Show started busking on street corners in 1998, winning audiences with their boundless energy and spirit. They caught the attention of folk icon Doc Watson, who launched their career by inviting them to play at his festival, MerleFest, an annual tribute to the music of Doc and Merle Watson. Shortly thereafter, the band was hired to entertain crowds between shows at the Grand Ole Opry in Nashville, TN.

Since then, the band has won two Grammy Awards including “Best Folk Album” for Remedy (2014) and “Best Long Form Music Video” for Big Easy Express (2013). Additionally, their classic single, “Wagon Wheel,” received Platinum certification in 2013 for selling over one-million copies.

Old Crow Medicine Show has toured the world playing festivals and venues such as Bonnaroo, Cambridge Folk Festival, Coachella, The Kennedy Center Concert Hall, Summerstage in Central Park NYC, and the Newport Folk Festival. Regular guests on the NPR show, “A Prairie Home Companion,” they were touted by host Garrison Keillor as “one of the greatest bands that A Prairie Home Companion has ever had the pleasure to host.” They’ve shared the stage with artists such as Mumford & Sons, The Lumineers, Willie Nelson, John Prine, Edward Sharpe & the Magnetic Zeros, The Avett Brothers and others.