Of Pillories, Stockades and Whipping Posts

It’s hard to believe that there was a time in this country, not too long ago, when public punishment and shaming took on a different, more physical form. These days both still continue – we’ve just replaced brandings, placing people in stocks or pillories and throwing rotten vegetables at them, or tying them to whipping posts to be flogged with various social media platforms.

While the method may have changed, the love affair is still a steamy one, and the eager pursuit of finding targets persists. Is it human nature? Both are archaic practices only separated by time and in my opinion, a bit sadistic and the world would be better off without them. In addition, often the mob exacts their brand of “justice” on the wrong target, but once that fervor is whipped up there is rarely a turning back and rescinding of the order. 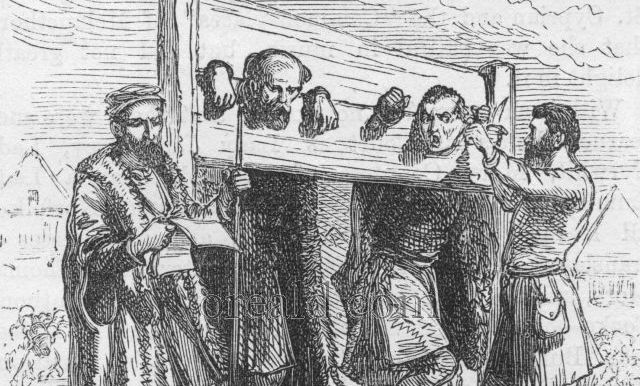 Anyhow, I seriously doubt the practice will ever die out. There is no time in human history that war, punishment, and taxes didn’t exist and it’s unlikely to change any time in the near future.

But it’s not fun in any way or practical to spend time philosophizing and condemning the social mores of a particular Zeitgeist, so let’s check out some of the methods that we Americans utilized since the first Europeans landed on our shores to as recently as 1932. Yes, 1932 was the last time a pillory or stocks was used in America before the practice was abolished unlike in England where it is no longer practiced outside of charity events, but has not been abolished. In 2012 in Colombia, an amorous pair, one 39-year old female and her 18-year old “boy toy” were placed in stocks for 72 hours because the woman was married and committed adultery.

What are the differences?
First an explanation of the devices – no, not today’s stocks, pillories and the whipping posts called Facebook, Twitter, and Instagram but the various, incredibly creative ways mankind invented to publicly torture folks. Imagine what could have been if we had used that time, energy and creativity to create beneficial things?

The words stocks (short for stockades) and pillories conjure up people with their hands and/or feet trapped in a public square and their faces exposed for all to see and if one was feeling particularly “virtuous” they could spit upon their targets, throw dirt, vegetables, fruit or even human waste. 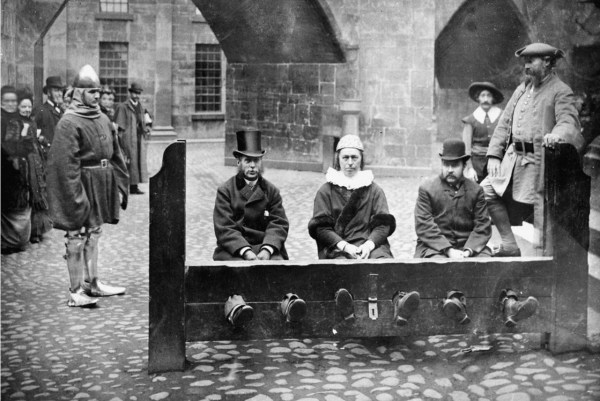 Even crueler is that locals were allowed to go right ahead and punch or kick the trapped “criminals,” paddle them or whipping their feet with a switch. I guess it would be subjective, but some were “tortured” by having their feet tickled. For those who don’t see that as punishment, have never been held down by a bigger sibling and tickled until they pee their pants and beyond.

Typically they were used to shame people for minor offenses, retain those awaiting trial, or as actual punishment for the more serious crimes. Depending on the society – Old World or New World – it was classism at its worst singling out the poor or lower class and not something to which the rich were subject. How’s that for privilege for the “1%ers”? But fear not, in some segments of society, even the wealthy weren’t immune as the banner image shows.

A creative array of Stocks or Stockades
Generally speaking, a stock is somewhat like those clapboards utilized in between move takes where a crew member yells “Aaaaand…ACTION!” but of a much larger size. On each half of the hinged human clapboard is a semi-circle so that the “to be shamed” could rest their wrists or ankles and when the other half was joined it would trap the hands or feet leaving no means or escape.

Some were high, trapping the hands and forcing a person to stand for hours on end and some – called foot stocks – were low and more “humane” allowing a person to sit on the ground. Others combined hands and feet for an incredibly uncomfortable feeling, and some even were made to shame multiple people – perhaps couples or families. There were also Finger Stocks whereby just the finger was inserted, bent into the stocks, then the upper half was lowered making it impossible to remove your hand without snapping your finger into bits. They were a particular favorite form of punishment dished out by school teachers in Victorian England. 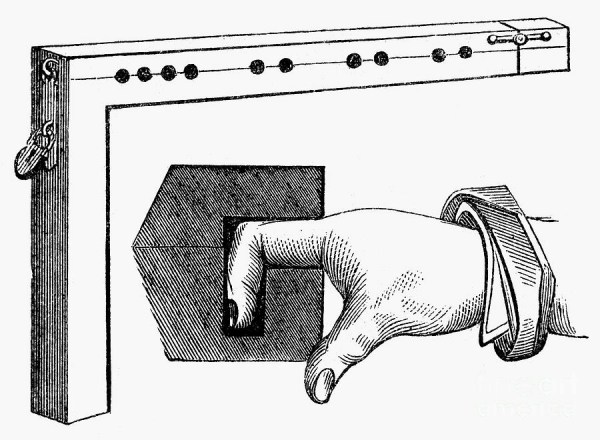 There were Hanging Stocks where only your hands were placed in the stocks but as high as they could over your head. Stocks were even mobile! The standard stocks would be placed on a cart so you could place multiple people on them and have the horse pull them around. A yoke was a board that had either just the hands, just the head or both. The varieties – I’ve only covered a few – are astounding.

If the head was trapped and the stocks were atop a post or side runners, that was a pillory. Therein lie the difference and common confusion that leads to the two becoming interchangeable terms.

Common crimes that would get you sent into stocks or pillory ranged from adultery, stealing, violating rules of the Sabbath, having a “forked tongue,” public drunkenness, accruing debt you couldn’t pay, begging, being a witch or pretty much just about anything. Non-criminal acts include placing a slave into them for escaping the plantation, not working hard enough, or as an alternative to whipping and damaging them so they couldn’t work. Foot stocks were the preferred device to keep slaves from escaping while being transported across the Atlantic during the slave trade, or from their quarters once they were interned.

There are absolutely abhorrent, vile and disgusting historical cases of slaves being sent to the stocks or pillories because a slave owner was too exhausted from whipping a slave. In the cruelest and most inhumane of cases, slaves were not only placed in them but were flogged and even had red pepper rubbed in their eyes. It was also not unheard of for slaves to spend days or weeks, or even until they died.

Barrel Pillory, Drunkard’s Cloaks, and Whipping Posts
One particularly unusual form of pillory that was popular in the Old World, but never caught on as much here in America, was the Barrel Pillory which allowed officials to parade the perpetrator around. It consisted of strapping a person into a barrel leaving the top and bottom open so their feet and head were exposed. In America it was limited to being used to punish prisoners within the penitentiary system or on soldiers during the Civil War when it was called Drunkard’s Cloak for soldiers who couldn’t perform their duties because they were inebriated.

Women got their very own traveling pillory called a Shrew’s Fiddle called so because it was in the shape of a fiddle and was for especially quarrelsome, ill-tempered women. The lightweight fiddle trapped their head and hands and had a leash that allowed the official to drag them around in public. There were even fiddles that could hold two women at a time for the cases when women were at each other’s throats too often.

What must have made it even more torturous is that the fiddle was made so the two women had to face one another. Imagine your face being 6 inches away from someone you really don’t like for 24 hours? 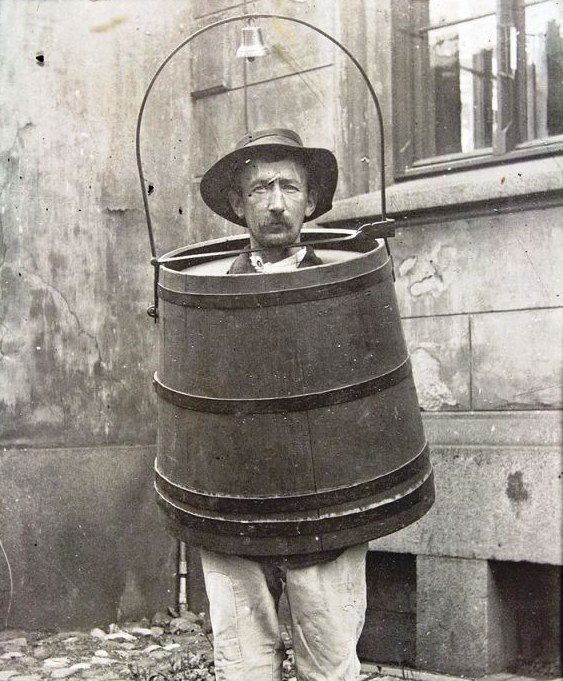 The Whipping Post was a catch-all term that could be a post or could be a beam or joist. A person could be in stocks or a pillory, but didn’t have to be. In addition, the could be on a cart or seated in a wooden box trapped about the waist keeping their upper body exposed so it can be lashed.

An example can be seen in Acushnet today in front of the Humphrey Hathaway house near the Post Office which historic documents refer to as far back as 1785 when it was last used “…in front of a lot of bystanders and schoolchildren who had just been let out of school. It was administered to John Black who was punished for stealing.” It is also said that there was one in Fairhaven on the northwest corner of Center and Middle Streets, but there is nothing there today.

Contemporary Versions
In modern times, there have been cases where a judge has given a defendant the option to serve jail time or be publicly shamed by wearing a sign (called a sandwich board) just like in the 17th and 18th century that stated the crime with which you were being punished. Of note was the 2004 case of a person convicted of stealing mail and sentenced to wear a sign declaring “I stole mail. This is my punishment.” for 8 hours. I’ve seen video and images of parents making their teenage kids wear signs like this as well.

In 1989, officials in Dermott, Arkansas passed a law for violating a curfew that made it punishable by imprisonment for the violator and up to 2 days time in the stocks for their parents. The stocks were never utilized because oddly enough the town didn’t have the funding to erect one.

An article on Rotten Scallop, a satire site based on local news and current affairs discusses bringing it back.

“Go ahead and try to wear your pajama pants before 7 p.m.,” stated David Coelho, who earlier in the month got his measure to ban pajama pants in daylight hours passed. “That’s an hour in the pillory. Baggy pants? That’s two hours and 10 whacks from the paddle.”

Other suggested offenses that would merit time in the pillory were voting for a Republican, panhandling, caught wearing New York Yankees gear or saggy jeans exposing your underwear and my personal favorite, “Threatening to ‘unlike’ New Bedford Guide’s Facebook page.” 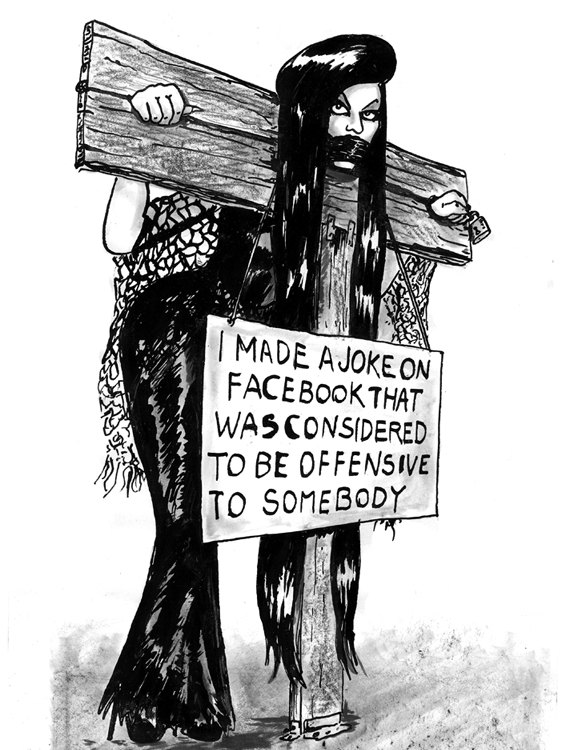 These days they are used as entertainment at “Ren Fairs,” to help raise funds for charities and as photo opportunities in old quarters of towns and cities. I mean, who doesn’t want a “selfie” of one of their friends in a pillory to stand out from the rest of the selfies? Some people have even suggested that having a friend that constantly uploads selfies is a form of punishment in itself.

People get boycotted, asked to resign, lose their jobs, are ridiculed, and shamed all day, every day on social media platforms. Personally, I’d rather spend a few hours in stocks and have rotten vegetables thrown at me, even paddled. I’m sure there are those that would find much happiness in that.

Which sort of begs the question: since we have always had a love affair with social punishment, shaming and justice and it’s part of everyday life these days, why not just bring back the shaming element as a form of punishment for minor crimes instead of bloating the local jails and prisons and at the taxpayer’s expense?

Well, I am not suggesting it, I’m asking for a friend.