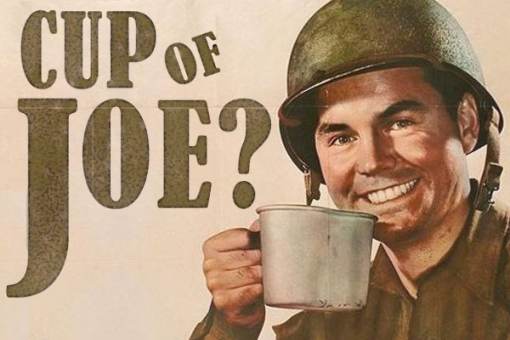 Of Doohickeys, Whippersnappers, and Tomfoolery

One of the more polite versions of “Cup of Joe.” This image has become a popular meme.

Figures of speech, idioms, slang, dialects, creoles, pidgins, and other aspects of language have always intrigued me. I would never call myself a writer, but I am a reader. An avid one. Some of my fondest childhood memories were of being swept away to Mars with Asimov, Hobbiton with Tolkein, or to Puritanical 18th century England with Howard. My family are all readers, so when I was paired with not one, but two excellent English teachers in middle school, I began to get an even greater appreciation for words. Coincidentally both English teachers were named Mr. Carter. Both were master teachers who were clearly passionate about literature and more importantly about enriching young minds and instilling the love of English and languages in general.

I’m assuming that I’m not alone out there and that there are people who enjoy this sort of thing. People who enjoy spelling, grammar, syntax, etymology, and definitions. We are the last bastions of the English language. Logophiles and nerds unite!

I grew up in the 1970s, but recall some of the words my parents and grandparents used. I recall men calling other men they didn’t know mac, bub, cat, boss, daddy-o, and pal. Pal is one I have retained and still use pretty often today. It’s supplanted “dude,” for me. Even rarer is the term, coincidentally, “Joe.” Which not only could be used to address someone you didn’t know or just met, but it could also refer to coffee. “I’m heading down to Woolworth’s and going to enjoy a cup of Joe.” Since I enjoy inflicting my poor humor on others, when I’m with older…er…wiser company, I’ll offer them “a cup of me.” Insert drum rim shot here. Go ahead, throw your rotten vegetables. If I haven’t crossed that line yet, then “Take my wife.” Have at me.

The 80s, a particularly rich in slang time period brought us homeslice, homeskillet, bruh, and

Whippersnapper refers to the day when teenagers didn’t rob convenient stores and do heavy drugs, but their crime was throwing those little white baggies that had gunpowder in them. Imagine that? When you saw a kid your primary worry was whether the little puke was going to be a whippersnapper. That’s a much better “-er” than robber, drug abuser, or killer.

When a bunch of boys got together, you better believe there was going to be some tomfoolery, hijinks, or some raising Cain. Of course, if you were a square you wouldn’t have any of that.

How about the words invented for slapping temporary fixes or repairs? The Jury-Rig or the Guinea-Rig. Being Italian, the latter one would garner raised eyebrows – but back then people were less sensitive and less eager to cry out “racism” every three minutes.

There were even more words for that tool or object whose name you had forgotten: the doohickey, thingamajig, doodad, thingy, watchamacallit, thingamabob, etc. Funny, thing is that everyone knew exactly what that poorly described thing was.

Money has always been a popular one to give names to. Beyond bucks, we had greenbacks, duckets, moolah, jing, grub, bread, and scratch. “You buying? Because I’m crying.”

Today we have bad, awesome, sick and wicked or mad cool. Yesterday we had capital, top, ace, neat and keen. The 80s brought us rad, gnarly, fresh phat and tubular. Oh, man. The 1980s. They also brought us the opposite of good: grody and bogus.

For girl, we have chick, hottie, bunny and in certain sub-cultures a less savory term and that seems about it. Growing up we had a LOT of terms: dame, broad, bird, skirt, fox or for the less popular ones, skag. Coincidentally, if something wasn’t up to par or was not good, it was “For the birds,” as in “Doing chores is for the birds!”

Well, hope you enjoyed this light-hearted historic stroll. A slight departure from the hard history.

When you meet up with friends in the next few days, feel free to break out some of these old terms and have a laugh. In fact, if you like to torture your teenage son or daughter, like I do, you can wait until he or she is in a group of their peers and say “What’s the word, homeslices? Where the cute birds at?” and when they look at you like you have three heads you can finish, dare I say coup de grace with “Why you guys tripping? Chillax.”

When Joe isn't writing, he's coaching people to punch each other in the face. He enjoys ancient cultures, dead and living languages, cooking, benching 999#s, and saving the elderly, babies and puppies from burning buildings. While he enjoys long walks on the beach, he will not be your alarm clock, because he's no ding-a-ling.
Previous 19th Century Perspectives: Ice Harvesting for refrigeration
Next Homes For Heroes program provides home savings to South Coast’s heroes