“On December 22 just before 2 a.m. Trooper Benn Pouliot, a recent graduate of the 86th Recruit Training Troop, along with his Field Training Officer, Trooper Edward Brunton, assigned to State Police-Northampton, were stationary observing traffic on Route 91 in Northampton.

At that time they observed a red Mercury sedan with no license plates attached anywhere on the vehicle. The Troopers pulled into traffic and initiated a motor vehicle stop on the Mercury just North of Exit 23 on Route 91 northbound.

Upon the vehicle coming to a full stop, the Troopers approached it and observed a piece of paper attached to the rear window with license plate numbers handwritten on it. They then made contact with the operator, identified as JEFFREY BAIRD, 41, of Springfield, Vt., and informed him why he was stopped. When asked, BAIRD could not produce a driver’s license or registration. Troopers quickly discovered that BAIRD’s license was suspended and the vehicle was unregistered. BAIRD was removed from his vehicle and placed under arrest, then seated in the rear of the cruiser.

Prior to the vehicle being towed from the scene the Troopers conducted a required inventory of its contents. During the inventory they discovered a .357 caliber revolver, along with five rounds of ammunition, and a spring-loaded knife. BAIRD does not have a license to carry firearms. Troopers then began a full search of the vehicle and located numerous pieces of drug paraphernalia, approximately 10 grams of a substance suspected to be crack cocaine, approximately 210 grams of a substance suspected to be crystal meth, a large amount of US currency, and an additional three rounds of ammunition.

BAIRD was transported to the Northampton Barracks for booking. A bail commissioner was contacted and set bail at $100,000. He was transferred to the Hampshire County House of Correction pending his arraignment at Northampton District Court on the following charges: 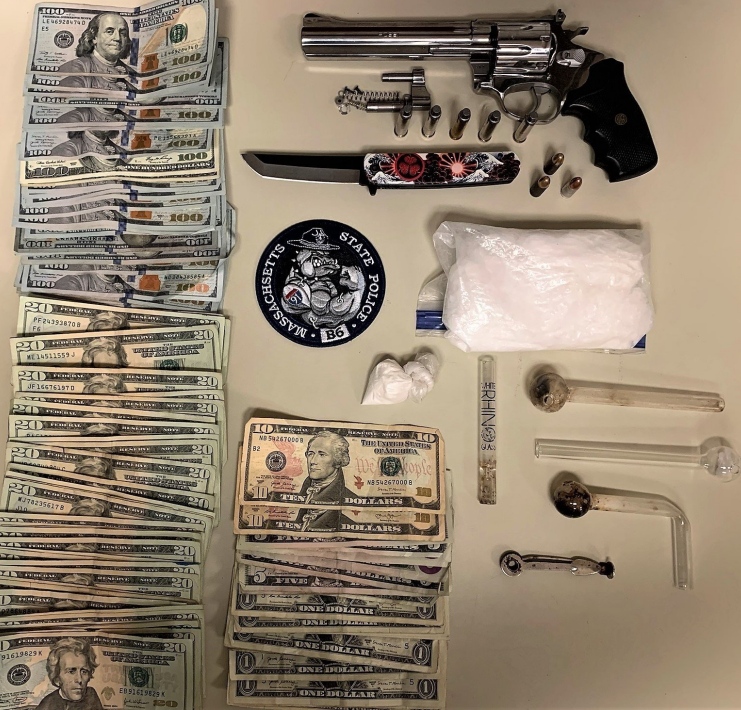