Home / Announcements / New Superflat NB mural installing June and July in New Bedford; “Postcards to New Bedford” will be homage to the city 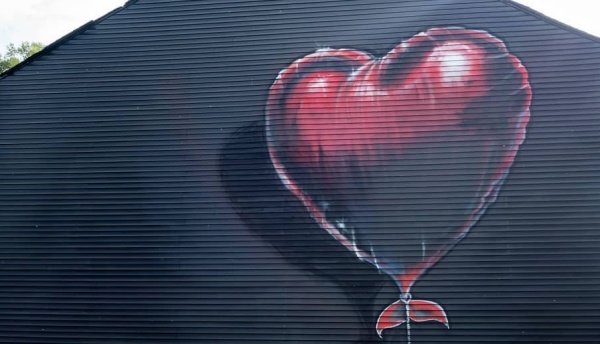 New Superflat NB mural installing June and July in New Bedford; “Postcards to New Bedford” will be homage to the city

Superflat NB is excited to announce its Postcards to New Bedford mural will be installed during June and part of July in downtown New Bedford, on the back wall of 674 Pleasant Street. The organization was the recipient of a Wicked Cool Places 2019/2020 grant to create a mural that pays homage to the city. Creative Direction is being handled by Greg Pennisten, a professional sign and mural painter who is collaborating with four other artists, Kailey Barrows, Alex Jardin, Lena McCarthy, and Eden Soares.

Describing his approach to the project, Greg commented, “I thought why not allow artists to create multiple cards giving each artist an individual voice or “postcard” to represent their relationship to the city. Postcards are of course, fundamentally, snapshots. Often of a place in time or an object of significance in a particular place, they can also be imaginative, artistic, and less literal. They often serve to preserve memories or celebrate moments, a quick note attached to an image of where one was and when. Each of the artists chosen for this project exemplifies the ability to create such a vignette in their own unique and creative language; relating a memory or thought of New Bedford that is in some way important to them.”

In addition to overseeing and creatively leading the project, Pennisten’s contribution to the mural will commemorate a former West End mural that honored Cape Verdean teenager Lester Lima whose life was tragically cut short in July of 1970. He wishes to honor not only one of the pioneers of New Bedford “street art” but also Lester Lima himself.

Barrows’ interpretation will use a menagerie of creatures that are associated with the area to represent the diverse, supportive New Bedford community. Jardin’s will be his perspective of life in New Bedford through a surreal, nautical narrative of commercial and leisure vessels as well as the notable Butler Flats Lighthouse. McCarthy is honoring a resident of New Bedford and the first in her family to receive a graduate degree, her great grandmother Lena. And, Soares’ version will leverage the retro lettering style of tourist memorabilia as well as landmarks and icons that reflect the rich history of the city. Using various snippets of other postcards, Pennisten is taking each approach and fitting them together as if the postcards had been thrown up in the air and landed haphazardly.

Further elaborating on the project, Greg noted, “Often times we look back at old postcards and realize not much has changed, structures still remain the same, people congregate in the same area and the notes written on the backs speak of similar moments in human lives across time. Postcards can also be used as tools of social archeology and should be viewed through the same lens as any other artifact. Hopefully, in the future, younger generations will be able to look at these postcards we are sending through time and see things have changed. Be it a changing landscape, style of dress, or social construct, we are attempting to record snapshots of what was and is in an effort to memorialize it for a vastly unknown future.”

This installation joins approximately ten other murals that Superflat NB has either brought directly to the city or in partnership with other local organizations so that all residents of New Bedford, can enjoy public art. “Now more than ever, we need to find ways to connect with one another even though we can’t necessarily be shoulder to shoulder. Placing art in neighborhoods and throughout the city makes that possible. What Greg and the team have put together is both visually stimulating and thought-provoking. We are excited to see this project come to life, and for all of you to enjoy it,” said Co-Founder, Jeremiah Hernandez.

Superflat NB is a creative placemaking, mural art organization dedicated to beautifying New Bedford while flattening barriers to the arts. It aims to foster pride and ownership of shared spaces through public art by giving local, national, and international artists a role in revitalizing the city of New Bedford while creating inclusive environments where anybody can experience great art. Serving young people is central to its efforts. The organization wants to inspire them and be inspired by them, creating new explorations of culture, expanding social networks, and making connections to resources and opportunities.