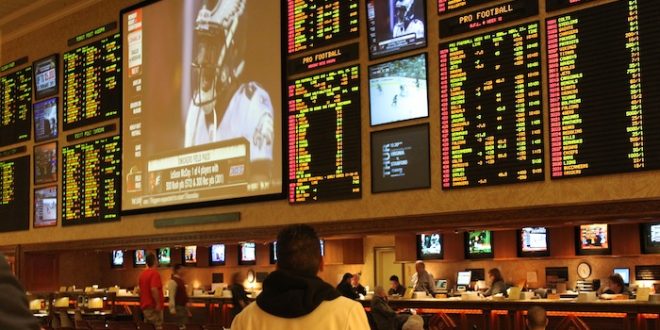 Adults in Massachusetts would be able to bet on professional and Division I college sports in person and through web or mobile apps under legislation released Friday by a legislative panel that’s been studying sports betting for a year.

The Massachusetts Gaming Commission would be given the discretion to write the actual rules for sports wagering, but the Joint Committee on Economic Development and Emerging Technologies envisions a betting ecosystem that could include the state’s resort casinos, the lone slots parlor, tracks with live horse racing, and as many as five online-only operators.

Bettors would have to be at least 21 years old and be physically present in Massachusetts.

While 17 other states, including neighboring Rhode Island and New Hampshire, have already authorized gamblers to place legal bets on sports, Massachusetts has been considering whether to similarly legalize betting since the U.S. Supreme Court in May 2018 ruled that the nearly-nationwide prohibition on sports wagering was unconstitutional and gave states the ability to legalize the activity.

“We didn’t rush this process. We took a very deliberative approach, recognizing that there were goals to this legislation and above all else was to protect the consumer and the taxpayer. We always said that we wanted to be in the black on this bill and not suffer losses like other states have done,” Rep. Ann-Margaret Ferrante, House chair of the committee, told the News Service on Friday.

“The second thing was that we wanted to make sure we put protections in for athletes and recognizing that bets are usually taken on horses and, in some states, dogs and other animals. With people, we really stepped back and said, ‘what provisions can we give the people who participate in these sports and especially for the college athletes?'”

Gov. Charlie Baker last year proposed a bill that would allow betting at licensed casinos in Massachusetts and through online platforms like Boston-based DraftKings. A slew of lawmakers proposed similar legislation.

With four months remaining for the Legislature to conduct significant business, the issue of sports betting could now vault onto lawmakers’ to-do lists alongside the state budget, a tax-hiking transportation bill, health care legislation and an expected economic development bill.

The legislation, crafted after a two-day hearing last May and months of research on betting laws and regulations in other states, is expected to net the state about $20 million in annual revenue, Ferrante said, after accounting for the costs associated with enforcement.

Whether bettors should be allowed to place wagers on collegiate sporting events and whether legalization would be successful without collegiate betting emerged as a key consideration during the committee’s hearings last year.

“It’s a huge piece of the market, so if you prohibit college betting you are ignoring an active black market,” Gaming Commission Associate Counsel Justin Stempeck told the committee last May. “On the other hand, if you allow college betting on sports, you have to be cognizant of the added pressures it puts on student athletes and they’re perhaps the most susceptible to these pressures because they’re not making millions of dollars on a professional league contract.”

Baker’s bill would not have allowed betting on any college contests, a decision his secretary of housing and economic development said was made in an attempt to take a “measured approach” to introducing betting.

Ferrante said the bill also establishes a Collegiate Health, Wellness, and Education Fund into which 5 percent of all sports betting revenues would be deposited to help shield college athletes from some of the possible pressures that could come with legal betting.

“If there’s a threat, if there’s a security issue, if there’s an educational issue, we would put aside revenue into a fund to provide them with the extra support that they would need,” the chairwoman said.

The three in-state casino operators — MGM, Wynn Resorts and Penn National Gaming — submitted joint testimony to the committee last spring in which they said they would support allowing some online operators, DraftKings or FanDuel, to get a piece of the sports betting pie.

The companies said they should be the only ones allowed to take bets at physical locations and that mobile betting should be reserved for themselves and “a limited number of daily fantasy operators with proven sports wagering experience.”

The committee appears to have followed a similar path. Only licensed casinos, the Penn-run slots parlor and live horse tracks could take in-person bets under the committee’s bill.

The committee also adopted the idea of requiring mobile or online-only sportsbooks to have proven experience and to limit them in number. The legislation released Friday would allow up to five online operators and would require that they have at least one year of experience operating daily fantasy sports contests and experience offering online betting in at least two other states.

“This bill is an important step toward eliminating the pervasive illegal market, creating a safe and responsible sports betting experience for sports fans in Massachusetts and boosting the Commonwealth’s innovation economy,” a DraftKings spokesman said Friday afternoon. “We want to thank Chair Ferrante and the members of the House Economic Development Committee for their leadership and diligence on this issue. We look forward to working with Chair Michlewitz and all the members of the House Ways and Means Committee to move this legislation forward.”

In 2013 and 2014, 12.6 percent of Massachusetts residents had placed a bet on a sporting event in the last year, Gaming Commission Chairwoman Cathy Judd-Stein told lawmakers last year as they first dove into sports betting policy. By 2015, that percentage had climbed to 17.9 percent, but fell back to 16.9 percent in 2016, she said, citing the commission’s research into the topic.

People who might have influence over the outcome of a game or information not available publicly — athletes, coaches, umpires and officials, team or league employees and others — would be barred from placing bets, under the bill, as would employees of the Gaming Commission, sports betting licensees and vendors.

Ferrante said the data her committee reviewed showed that about 85 percent of all sports wagering revenue is generated by mobile betting platforms. The difference in tax rates is meant to recognize the investments physical sportsbooks operators have or will have to make and the additional costs that hold down the profit margin at a physical betting location.

Sportsbooks tend to operate on small profit margins and the projections for state revenues under previously proposed legislation have hovered around roughly $30 to $35 million. Baker was confident enough about sports betting becoming legal to write $35 million in sports betting revenues into the $44.6 billion fiscal 2021 budget he filed last month.

The committee’s bill does not appear to include any compensation for the sports leagues, though the NBA and others have pushed for a 0.25 percent fee on all wagers placed on any specific league’s games.

“It is modest compensation that fairly treats the leagues as stakeholders and partners. If this happens in Massachusetts, it is new and exciting and a lot of people see a lot of opportunities. But you cannot escape the fact that absent our games, there is no new market to bet on or to be excited about,” Alexandra Roth, associate counsel for league governance and policy at the NBA, told lawmakers last year.

Ferrante said the issue of “integrity fees” is one that could become part of the conversation as her committee’s bill moves on to the House Ways and Means Committee, the House floor and possibly through a similar process in the Senate.

“It was important to us to put a bill out so that we could start this process going and that may be resolved later on in the process,” she said.

The bill also includes consumer safeguards to protect against problem gambling similar to those provisions put in place for casinos when Massachusetts expanded gaming in 2013, like allowing gamblers to add themselves to an exclusion list and requiring that operators implement responsible gaming programs.

Though much of the discussion during the committee’s consideration of sports betting revolved around how to structure and regulate bets, the committee also heard from people who think the Massachusetts should not further expand state-sanctioned gambling.

“Last year alone, the American people lost $118 billion of personal wealth to government-sanctioned gambling. Over the next eight years, the American people are on a collision course to lose more than $1 trillion of their personal wealth to government-sanctioned gambling,” Les Bernal, national director of Stop Predatory Gambling and a former chief of staff to former state Sen. Susan Tucker, said in May.

He added, “If you bring in sports gambling, particularly online, you’re going to make these financial losses to citizens even worse.”