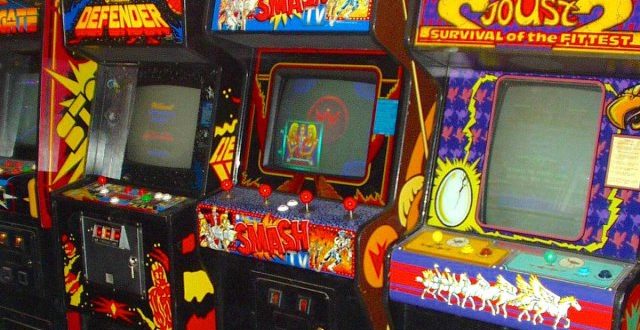 Did you grow up in the 1980s or 1990s and have fond memories of spending a day at places like “The Dream Machine” playing games like Dig-Dug, Robotron, Centipede, Pac-Man, and others? Well, you’ll soon be able to take a stroll down memory lane and bring out that little kid inside.

Fairhaven residents Lauren and Adam Katz will be taking over downtown New Bedford’s Slainte Irish Pub and re-open the location as a coin and token operated 80-90s arcade with a kitchen, bar, function rooms, sidewalk seating, as well as the rooftop seating the Irish Pub was known for.

The husband and wife duo will feature dozens of stand-up arcade machines, skeeball, a bar offering among other things dozens of craft beers on tap, as well as a yet to be determined menu. Have a birthday, anniversary, work party or other special events to celebrate? You can utilize one or both function rooms which seat up to 50 people.

While the idea of an arcade will, of course, attract a younger crowd, anyone 18 or under will have to be accompanied by a parent or guardian up to 8:00pm, at which time it’s “Sorry kids! Game over.”

The Katzes are gunning for a Memorial Day opening pending approval by the Alcoholic Beverages Control Commission and transfer of the liquor license.