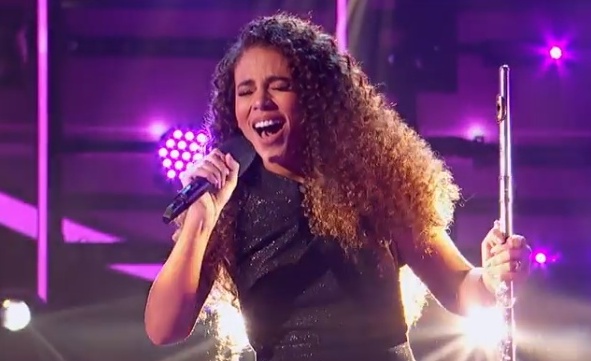 Samantha Johnson photo by FOX "I See Your Voice."

New Bedford’s very own Samantha Johnson made an appearance last night on FOX’s second episode of “I Can See Your Voice.”

How does the show work? Seemingly inspired by the popularity of another one of FOX’s shows called “The Masked Singer,” there are 6 “secret” singers only labeled by their occupation or day job. Without haven’t heard anyone sing a contestant has to use the information and clues given to them by a celebrity panel and pick off one “bad singer” at a time. If the last singer turns out to be the legitimate singer, the contestant is awarded $100,000.

New Bedford native, New Bedford High School alumna, and former America’s Got Talent competitor stepped up to the microphone under the guise of being a professional flautist. She then lip-synched her rendition of Sia’s “Cheap Thrills.”

She was then interrogated by the celebrity panel and asked a number of questions in an attempt to expose her as one of the five fake singers. She was asked how she got into music, the process she uses to get herself worked up before a performance begins (“I make jokes and act like it’s not happening,”), and what her biggest fears about getting into the music industry were (“That I didn’t have the right look.”).

Her final question was who it is she has been told she sounds like, “Mariah Carey” she replied.

Not knowing Ms. Johnson as we in New Bedford know her, this elicited a bunch of eye rolls. Apparently, they found that too hard to believe, and both the celebrity judges and the contestant flagged her as a “fake” singer and she was eliminated.

Ms. Johnson then broke out an impressive flute riff and ripped into a fiery version of Lizzo’s “Good as Hell” showing both the celebrity judges and the contestant how wrong they were. Something they immediately realized.