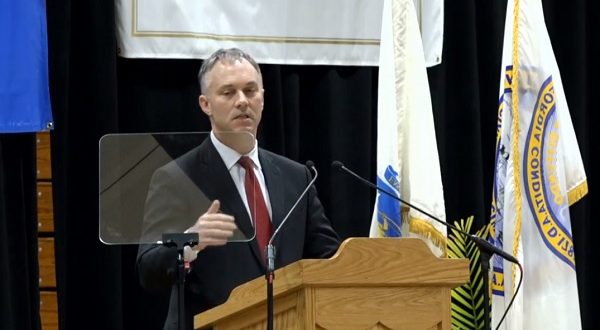 In a forward-looking State of the City address to a sold-out crowd today, Mayor Jon Mitchell focused on growth and opportunity taking shape as New Bedford emerges from the pandemic.

Speaking to more than 500 attendees at New Bedford High School, Mayor Mitchell’s address – delivered in-person for the first time in 2019 – covered a broad range of existing projects and new priorities that will energize the City for years to come.

“We’ve succeeded because we made the conscious decision to seize responsibility for our own economic competitiveness, we have planned comprehensively, and we execute our plans relentlessly,” Mayor Mitchell said. “The essence of our strategy…has been all about capitalizing on our strengths, whether it’s in the arts and culture sector, health care, hospitality, or manufacturing. …We double down on what we’re good at, we help to cultivate the small businesses that grow organically here, and we support our anchor institutions.”

Mayor Mitchell cited the “beehive of economic activity” coming to the City’s working waterfront, where hundreds of millions of dollars across numerous public and private projects will vastly expand the Port of New Bedford’s industrial capacity and resources for commercial fishing, offshore wind, and a wave of growing maritime industries.

“Our goal, simply stated, is to establish New Bedford as the top blue economy on the East Coast,” Mayor Mitchell said.

Announcements in the address also included a 25-percent increase in road construction funds in this year’s capital budget—part of long-term infrastructure planning that Mayor Mitchell noted has not always been a priority in New Bedford.

“The city didn’t have a capital plan when I got into office, but the one we’ve developed and executed has enabled us to more than double spending on road maintenance and building upgrades, which have included extensive energy efficiency retrofits,” Mayor Mitchell said. “We are committed to increasing this funding further still.”

He also addressed the rising costs of healthcare for more than the City’s more than 1,100 employees, pledging to resubmit a proposal this budget season to adopt a state law that would give the city greater control over rising healthcare costs. Nearly every city and town in southeastern Massachusetts has adopted the law, but New Bedford’s City Council has twice failed to move it forward.

“I urge councilors to give this proposal a thorough airing this time, so that everyone can understand that we can get better control over the long-term costs of healthcare without compromising the quality of coverage our employees enjoy,” Mayor Mitchell said.

Mayor Mitchell also announced major investments using American Rescue Plan Act (ARPA) funds to activate the development of vacant or underutilized commercial properties, as part of a continuing effort to ease the burden on taxpayers by broadening the City’s tax base.

“I am announcing today that we are setting aside $5 million in funding from the American Rescue Plan Act to accelerate the development of vacant commercial properties that need just a little more funding to be redeveloped,” Mayor Mitchell said. “By helping these projects over the proverbial hump, we can help the city pay its bills.”

The most boisterous of several applause breaks in the speech came in response to an announcement related to the iconic Zeiterion Performing Arts Center, known as “the Z,” which is about to undertake its most comprehensive renovation and expansion in 40 years.

“So that the Z can continue to thrive and contribute to the life of the city for the next 40 years, I am announcing today that we will invest $5 million in ARPA funds into the Z’s effort. As cities must reinvest in their anchor institutions, this opportunity frankly is a no-brainer,” Mayor Mitchell said.

He also spoke about the city’s physical beauty, and implored residents to continue involving themselves in the betterment of their community.

“A city is more than a place on a map. It shapes our relationships with one another, and is woven into our individual identity. It is part of who we are – past, present and future. When you devote your talent and energy to make your city a better place, you’ve committed to improving yourself.”

Read the full text of Mayor Mitchell’s 2022 State of the City Address on the City of New Bedford website.

When Joe isn't writing, he's coaching people to punch each other in the face. He enjoys ancient cultures, dead and living languages, cooking, benching 999#s, and saving the elderly, babies and puppies from burning buildings. While he enjoys long walks on the beach, he will not be your alarm clock, because he's no ding-a-ling.
Previous U.S. Marshals arrest Massachusetts man, unregistered sex offender, accused of murder and kidnapping
Next Massachusetts man pleads guilty to attempting to purchase Jeep with counterfeit check 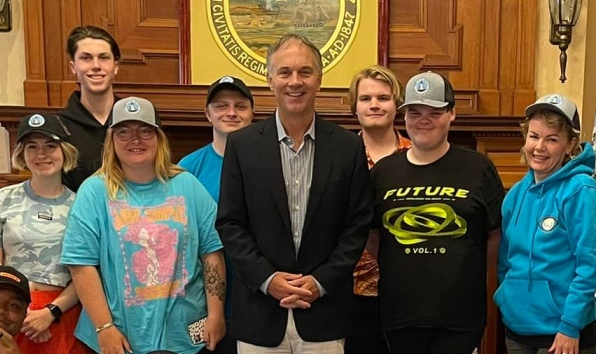 Members of the community will gather on Saturday, August 13, 2022 for a dedication ceremony …