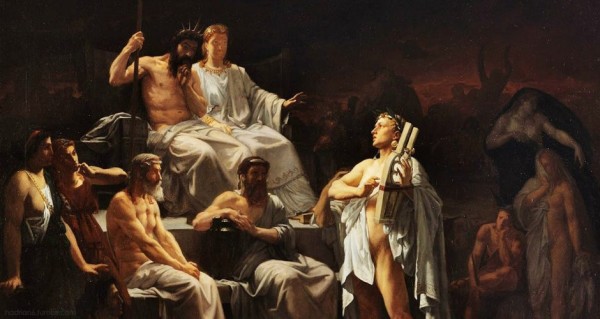 The Glass Horse Project, based out of New Bedford, MA, is set to open their fourth season, titled “Death and all His/Her/Their Friends,” with Eurydice, a retelling of the famed Orpheus myth, by Sarah Ruhl.

In the myth, Orpheus loses his bride, Eurydice, on their wedding day and creates the ballad as a form of expression. After many failed attempts of trying to find her, he braves the gates of hell and asks Hades if he can take her home. Hades agrees, with one minor stipulation: Orpheus cannot look back at Eurydice to make sure she’s following him. He must trust that she is, keep his eyes facing front, and only look back when he is sure they are safely out of the Underworld. All seems to be going according to plan until the anticipation and anxiety becomes too much for Orpheus. He looks back, breaking his deal with Hades. Eurydice rejoins the Underworld and Orpheus is not far behind her, having killed himself to be with her again. The myth has been debated by scholars as an allegory for patience, trust, the importance of music as a form of expression, and many other things, all the while, however, forgetting one major component of the story: Eurydice. 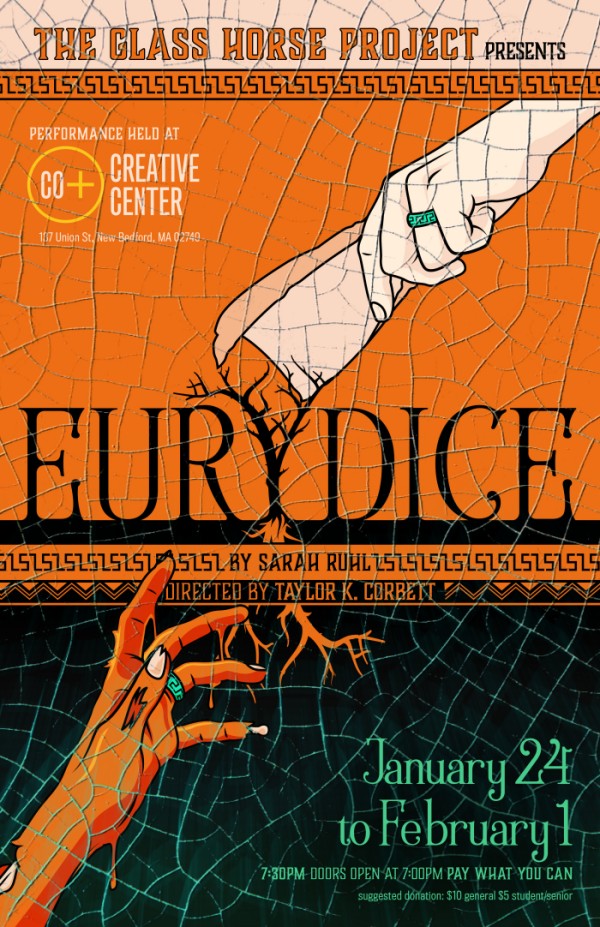 In Ruhl’s masterful retelling of the myth, the narrative frame is flipped to tell the tale from her perspective, ultimately allowing this often side-lined character to be the heroine with a newfound sense of agency. While in the Underworld, she meets a handful of interesting characters. No one more interesting, however, than her own father. The story interweaves movements and scenes in the Underworld and mortal world to blur the lines of time and space in order to ask questions about what it means to live a full life, to grieve, and the different ways that people confront loss and the courage it takes to move forward.

Co-Artistic Director of Glass Horse and Eurydice director, Taylor K. Corbett, adds, “as human beings, we always want to understand that which hurts us.” This is exactly what Glass Horse hopes to accomplish this season with Eurydice and the rest of their season. “Death, and all His/Her/Their Friends,” as a season, seeks to have audience members open themselves up to the same questions that philosophers and writers have been asking themselves since the beginning of time: what does it mean to truly live? Can we live a life without experiencing pain? Who or what is death: is it a mythical being, a state, or a collection of many things? What does it mean to “move on,” and how do we do it?

Glass Horse Artistic Director, Korey J. Pimental, adds: “Eurydice has us, as a company, pushing our boundaries by challenging us to see what is possible when creating theatre in a non-traditional space. I’m very excited for that. I’m also excited for audience members to come see the show and revel in Sarah Ruhl’s genius.”

The production is designed by Taylor K. Corbett, with design assistance by stage manager Sev Marshall, and print and digital media assets by Brad Costa Design. Eurydice is being performed at Co-Creative Center on 137 Union Street, New Bedford, MA 02740. The production opens on Friday, January 24, 2020 and runs Saturday January 25, 2020, Friday, January 31, 2020 and closes on Saturday, February 1, 2020. All shows begin at 7:30 pm. House doors open at 7:00 pm. The show runs approximately 100 minutes, no intermission.

As an organization, Glass Horse has a two-part mission: to give young theatre professionals a place to practice their craft and to alleviate many of the barriers that prohibit people from experiencing the performing arts. As such, it operates entirely on a pay-what-you-can model: there is a suggested door donation of $10 general admission and $5 for students, children, and seniors. Seating is limited and those interested in attending are advised to email theglasshorseproject@gmail.com to reserve seats with their desired quantity and performance date.

When Joe isn't writing, he's coaching people to punch each other in the face. He enjoys ancient cultures, dead and living languages, cooking, benching 999#s, and saving the elderly, babies and puppies from burning buildings. While he enjoys long walks on the beach, he will not be your alarm clock, because he's no ding-a-ling.
Previous No More Blackouts Advocates to Protest at New Bedford Mayoral Inauguration
Next Somerset Police Chief pays a very personal and painful tribute to Fire Chief Scott Jepson