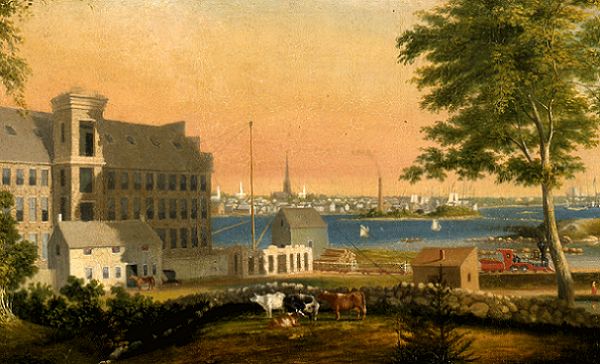 New Bedford, the village. The two don’t seem to go together, but as hard as it is to believe, there was a time when New Bedford was a small village. The entire region had hamlets, villages and towns and New Bedford was one of many. I have personally come across approximately 15 villages that surrounded the village of New Bedford. These villages eventually sprawled into one another, and as the region progressed the particular village called New Bedford stood out and raced ahead of the others. For this reason, when the villages became one, the city that they became was dubbed New Bedford. These villages still “exist” in the sense that they are now referred to as neighborhoods. In all likelihood you have heard of these villages or neighborhoods. As a matter of fact, you may use the names on a daily basis!

As is always the case with these historical articles, they simply can’t be “trued” without contributions from readers. The oral history and anecdotes help improve the articles. If these articles are looked at as a sort of “Wiki” with the community contributing, confirming, and adding, the articles’ accuracy can only be improved. So, please, by all means speak up. Don’t be shy! If you see an error, let us know in a comment here or e-mail us at info@newbedfordguide.com. As I mentioned above, I have come across 15 villages, but you may know of one I missed. I’d love to add her in! Lastly, since there is a serious lack of images from the 17th and early 18th century, for obvious reasons, I’ve chosen to illustrate the time using the absolutely gorgeous paintings of New Bedford resident William Allen Wall (1801-1885).

So here are the 15 villages and a little bit of information on each. Do you live in one?!

17th Century Beginnings
New Bedford harbor as many of you may already now, had Europeans putting around in it a few decades before the Pilgrims arrived. Bartholomew Gosnold we know was her on May 31, 1602. This is the fellow that gave Martha’s Vineyard and Cape Cod their names. It can’t be proven, but it is said that he made landfall somewhere around the South Terminal, northwest of Palmer’s Island in a spot called the “Smoking Rocks.”

After the purchase of the Olde Dartmouth region in 1652 by Bradford and the Proprietors, people began to slowly populate the area. In the early to mid 1700s the prominent Russell family came to New Bedford village and scooped up large tracts of land along the Acushnet River and began to farm and develop commerce and trade. The Russell family traced its roots to the Duke of Bedford, and in tribute to him named the village Bedford. No “New” yet as New Bedford was simply called Bedford or Bedford Village, and it was called this as “recently” as the Revolutionary War. Indeed, many war documents make reference to the the “village of Bedford” being torched.

The Russells, Rotches, and the Duke of Bedford
By 1760 the Russells, particularly Joseph Russell, began to sell lots of his land and because of the proximity of these lots to the waterfront, it began to attract fisherman, shipbuilders and the ilk. At that point, New Bedford included Acushnet and “Fair Haven” until they broke away in 1860 and 1812 respectively. As the village began to develop, the officials decided to make a distinction between another Bedford that was already established in Massachusetts and of course, the Bedford that already existed in England. New Bedford grew into a town and was officially granted its’ charter in 1787. This is how New Bedford, got its “New.” Faster, stronger, higher.

With the influx of fishermen, shipbuilders, and laborers, it was a no-brainer for Russell to begin to put some of his investment behind the growing whaling industry. When business mogul and whaling merchant William Rotch, Jr. got wind of what was going on, he came to New Bedford and began to ply his trade. Many captains soon followed. Once this happened the town began to attract merchants, banks, peddlers, and unskilled laborers. These are the biggest reasons that New Bedford grew and progressed so much faster than its surrounding villages and winning the contest to name the city they would aggregate to become.

Population Growth
By 1800 the town started to grow exponentially and by 1805 the number of dwellings had nearly doubled from 185 to 300. In 1847 it earned its city charter. By 1850 the population had again doubled and wouldn’t double again until 1890 reaching almost 35,000 people. People continued to relocate to the city until it reached its highest population, mainly due to the textile boom, in 1920 at 121,217 people. New Bedford’s population has declined slowly since then but has perked up a bit in recent years.

Here are the many villages that make up New Bedford in alphabetical order:

1. Bedford
Well. This obscure, unknown village outpaced the other villages to become New Bedford. Or so I’ve heard.

2. Belleville or Bellville
Belleville village is in the eastern part of New Bedford. Belleville Avenue runs through it. It was noted as a launching site for many of the whaling vessels, and a family called the Stetson’s were well-known shipbuilders who operated here. I’d imagine the name originated from the volumes of bells used whether to alert people of ships being launched or returning, or perhaps due to the number of Bethel’s or Church’s in the village.

3. Cannonville
Not to be confused with the Cannonville in the southern part of Mattapoisett, this Cannonville was located in the western part of New Bedford, what was or is the 2nd ward. Cannonville included Oak Grove Cemetery, Clasky Common Park, Kempton Street, Union Street, and was really at the heart of the city. Samuel Leonard & Sons ran the largest oil refinery in the nation out of Cannonville near Water Street and there is still a Leonard’s Wharf today in front of the recently built Fairfield Suites. There is still a small strip of Cannon Street left today and this was one of the villages that had a post office in the early years. Its eastern border reached the waterfront where the whaling vessels docked. There were cannons here that were used to defend the city and this is one possible way that the village got it’s name, but it’s pure conjecture.

It is possible that it is named after a surname as is the case with the Cannonville in Utah as there were a few Cannons living in New Bedford, particularly a James Cannon that was a surveyor, Henry Cannon, a boat steerer and Philip, Edward and Nathaniel Cannons that were owners of a number of whaling vessels. It was Henry Cannon that the street that still exists today was named after and is a likely candidate if this is the case. Regardless, the 1790 census turns up a Philip (perhaps the son of the above Philip) and a John Cannon who are also likely candidates.

4. Clark’s Point
Clark’s Point Village is the specific spot where the southern coast between Clark’s Cove and the entrance to the New Bedford Harbor is and the homesteads that surrounded it. There was a fixed white light at this point that was a lantern about 70 feet above sea level and said to be visible upwards of 13 miles. Clark’s Point’s first lighthouse was erected in 1797 by a small group of merchants. It is likely that one of the merchants – a Clark- named the point. Dear reader, if you know better, please let us know.

When Joe isn't writing, he's coaching people to punch each other in the face. He enjoys ancient cultures, dead and living languages, cooking, benching 999#s, and saving the elderly, babies and puppies from burning buildings. While he enjoys long walks on the beach, he will not be your alarm clock, because he's no ding-a-ling.
Previous The South Coast Hot Jobs List – 9 April, 2013
Next How would you improve your community in New Bedford?