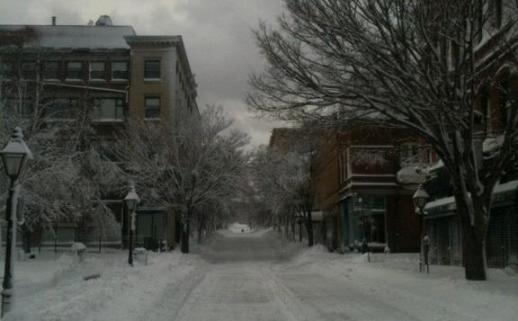 The City of New Bedford continues its preparations for a significant winter storm and encourages residents to exercise caution as forecasts call for temperatures to plummet overnight. The National Weather Service’s Winter Storm Warning remains in effect in New Bedford until tomorrow, Friday, January 3, 2013 at 10:00 A.M. A coastal storm will bring heavy snow along with dangerously low wind chills tonight and near blizzard conditions at times across portions of eastern Massachusetts.

The periodic snow experienced throughout the day will turn heavy this evening into early Friday morning with 1 to 2 inch per hour snowfall rates possible. A total of 8-12 inches of snow accumulation is predicted for the Greater New Bedford Area.

Heavy snow and gusty winds will result in low wind chills along with considerable blowing and drifting snow. Near blizzard conditions will be possible for a time tonight into early Friday resulting in whiteout conditions.

Citywide Snow Emergency Parking Ban as of 5 P.M. Tonight (Thurs. Jan 2)
The City of New Bedford has announced a citywide snow emergency parking ban to take effect this evening, Thursday, January 2, 2014, as of 5:00 P.M. The parking ban will remain in effect for 48-hours thereafter, unless lifted or further extended by City officials. The parking ban is designed to allow City workers to efficiently remove snow from New Bedford roadways to allow public safety vehicles and residents to travel safely.

Violations of this parking regulation will be subject to ticketing at $50 per ticket and towing at full cost to the owner of the vehicle towed. The vehicle owner is also responsible for the full cost of storage for any towed vehicle.

The City of New Bedford has designated the following areas as preferred parking areas for those residents in need of off-street parking while the emergency snow parking ban is in effect:

Changes to Residential Trash Collection
While residential trash was collected today, there will be no residential trash collection tomorrow, Friday, January 3, 2014. Therefore, residents whose normal trash collection day is Thursday should put their trash out on Saturday. And, residents who normally receive trash pickup on Friday should place their trash curbside on Sunday. (Due to the holiday, ABC was already operating on a one-day delay; the current change will put in place a two-day delay.)

Sand Available to City Residents at Various Locations
The Department of Public Infrastructure has made sand available to city residents at additional locations throughout the city. Residents are advised to bring their own small container to collect the sand at any of the following locations:

SRTA Services Suspended As Of 6:00 PM Thursday
The Southeastern Regional Transit Authority will suspend service as of 6:00 P.M. today, Thursday, January 2, 2013. Residents may call 508-999-5211 for information about the status of SRTA services.

New Bedford Hurricane Barrier Navigation Gate Information
The Army Corps will review storm conditions for this evening’s high tide at 8:35 PM and will make a decision whether to close the gates based on the surge. For Friday’s high tide at 9:01 A.M., the Army Corps will monitor the storm surge and make a decision whether to close the navigation gates. Any closure is not expected to exceed two hours.

Winter Weather Preparedness Tips for Residents and Business Owners
Residents and business owners are advised to review the Winter Weather Tips available on the
City webpage (www.newbedford-ma.gov), and to take proactive steps to prepare for the
storm.