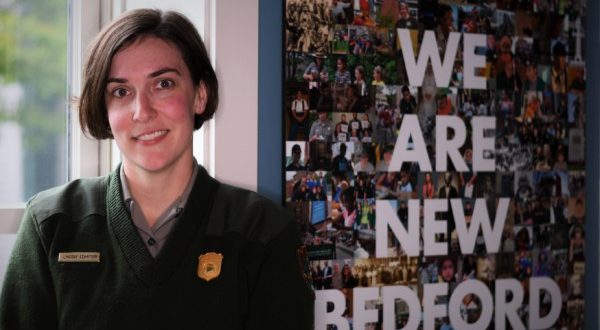 Even though she has just begun, Lindsay has already collaborated with the extensive network of artists, teachers, and community organizers that make up a large part of the NPS’s key partners. Lindsay’s role at the park will include managing the artist-in-residence program, which she is currently recruiting for. She will also oversee youth programming such as the Junior Ranger Service Corps, Youth Leadership Academy, and Whales, Tails & Sails.

“I am thrilled to be working here in New Bedford. It’s a wonderful opportunity for me to learn more about our cherished resources and stories, and to bring a new energy to the Arts and Youth programs,” Lindsay said. “Over the last ten years with the National Park Service, I have worked at Chickasaw National Recreation Area, Oklahoma City National Memorial, Congaree National Park, Colorado National Monument, and most recently, San Antonio Missions National Historical Park. Through many
moves and parks, I have served as a Park Guide, Supervisory Park Ranger, Volunteer Coordinator, Artist-in-Residence Coordinator, and Acting Chief of Interpretation.”

When asked about her plans for the future, Lindsay says. “I am done moving!” She adds, “In my free time I like to rock climb, travel, visit art exhibitions and museums, and hike with my rescue super mutt, Maude.” We look forward to all of the amazing skills and creative ideas Lindsay will bring to New Bedford in the coming years.

When Joe isn't writing, he's coaching people to punch each other in the face. He enjoys ancient cultures, dead and living languages, cooking, benching 999#s, and saving the elderly, babies and puppies from burning buildings. While he enjoys long walks on the beach, he will not be your alarm clock, because he's no ding-a-ling.
Previous Massachusetts State Police story time with the Colonel , Toto and Luna the Comfort dog
Next New Bedford Whaling National Historical Park to host 1619 remembrance of the first enslaved Africans to North America