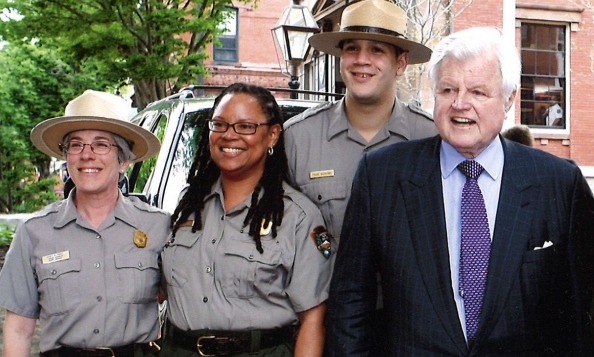 Michelle Spink once said, “Let’s be honest. It’s just cool to say I work for the National Park Service.”

Women’s History Month honors and celebrates the struggles and achievements of women throughout the history of the United States. Today, as part of this month’s theme and in celebration of the park’s 25 years of community service and preservation of history, upon the occasion of her retirement, we salute and honor Michelle Spink.

Michelle joined the park team in May 1999 and will officially retire April 2, 2021. Before joining the park, Michelle worked in IT for the Northeast Region in Boston. She had never been an Administrative Officer at a park before and said, in hindsight, that she really didn’t know what she was doing upon arriving for her first day at the park. Her many years of service and stellar record of accomplishments tell a different story.

In her own words she recollects those early years, “I stumbled upon the Park Service by accident. I started working with computer systems and networks by chance and found a career through which, over the years, I have met so many talented and caring people.” She further stated, “I want my children and future grandchildren to have access to the resources we [NPS staff] work to preserve and protect. And let’s be honest, it’s just cool to say I work for the National Park Service.” 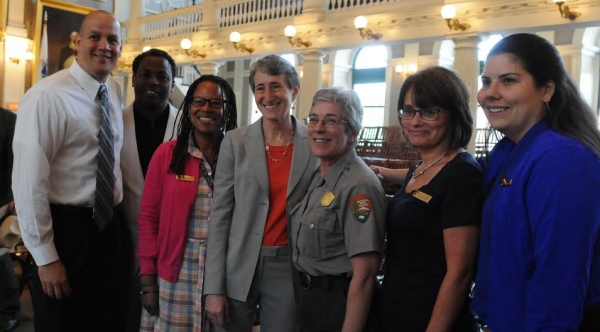 Through Michelle’s work with the parks (in 2015 she took on the role as Administrative Officer for “sister” parks Blackstone River Valley National Historical Park and Roger Williams National Memorial as well) she has interacted with park staff, volunteers, contractors, administrative program colleagues, regional and Washington level staff, and community partners.

“Michelle is always willing to lend a hand and dig in to solve a problem,” states Jen Smith, Superintendent of New Bedford Whaling NHP. “She refers to herself as the air traffic controller across the three parks, and I’m here to tell you, we’ve never had a crash and all of the planes have taken off and landed safely in the last 22 years!,” Smith continues.

In addition to her work managing the administrative programs for the park, Michelle has also served in recent years as the Leadership Team representative on the parks’ Health, Safety, and Wellness Team. Her passion for fitness, an active lifestyle and being outdoors is something Michelle plans on continuing in her retirement.

Michelle is a friend, a mentor, a colleague, a guide, a listener, a strategic thinker, and the consummate public servant. She will be missed by the park staff, NPS colleagues and partners who worked most closely with her. We wish her many hours this summer on her paddleboard, endless nature walks with her husband Robert and new dog, Charlie, and years of adventures in their new camper.

Together, we built a park.
March 29 at 10:00 AM ·
Thank you, Michelle, for everything.
#NewBedfordNPS25
#StrengthThroughCommunity”