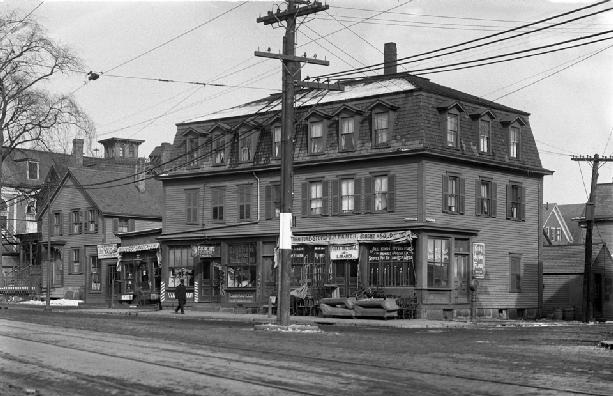 Welcome to next installment in the New Bedford Streets; A Piece of Americana series. Previously we covered William Street, Kempton Street, Middle Street, Centre Street, Ashley Boulevard, Elm Street, Coggeshall Street, Mechanics Lane and others. If you would like to read those or perhaps revisit them, they can be found by using the search bar to the right. You can also select the “Streets” category.

How many times have you taken the Washburn Street exit? If you do any driving locally – that’s well, everyone – chances are you’ve taken the exit and driven on Washburn Street hundreds – nay, thousands – of times. This little strip of road spans the Acushnet River to Acushnet Avenue abutting Route 18. It’s a strip of road that folks rarely stop on and if it weren’t for Kyler’s Seafood, I wonder who would ever stop on it!

So how did this heavily trafficked thoroughfare earn its name? How did this street that many of us are on daily become Washburn Street? Let’s dig a little.

The Washburn name is a very old one that can be traced back to 13th century England, where it was Washborne or Washburne which is a fuller’s stream or stream where washing was done.

The family was a distinguished one whose vanguard was church warden John Washburn (1597-1669) who arrived in 1631 at Duxbury or Duxborrow as it was known then. After establishing himself as a town surveyor, grand juror and possibly as Secretary of Massachusetts Bay Colony, he returned to England to prepare his family’s passage to the New World. He returned in 1634, purchased a palisaded homestead called “The Eagles Nest” and his family, wife Margery (Moore), and sons John and Philip followed shortly thereafter aboard the historic Elizabeth and Anne in April of 1635.

John’s brother William started a line of Washburn’s in Long Island New York. All Washburns can be traced to these two forks. John and William were born of a rather well-to-do family. Their father John was a husbandman who had substantial land holdings. This status and the finances paved the way for John to serve his high social positions and to become one of 54 original proprietors of Bridgewater by purchasing land from the Massasoit Indians.

The prominence and privilege that the monies and position gave the Washburn family allowed them to have many children and spread over much of early New England, particularly Middleboro, Lakeville, Bridgewater, Providence, Connecticut and of course, eventually greater New Bedford. Future Washburns would serve in several Indian wars, the “French” war, the Revolutionary War, become generals, lawyers, Justice of the Courts, and Congressmen. There is historical mention of Bazeliel and Thomas Washburn who were on the payroll of the Company of His Majesty’s Service in the 1760s.

The first Washburn to come to New Bedford was Lieutenant Amos Washburn of Middleboro, now Lakeville. He served in that militia’s 7th Regiment, which came to Fairhaven and New Bedford to fend off the British when they landed here in 1778. A duty which earned him promotion to Captain. Amos was the great-great grandson of the original John Washburn from England. Historical records name five of his children, but it seems he had a few more. One of these children, James Washburn graduated from Harvard, class of ’89…1789 that is!

James went on to practice law in Middleboro, and was even appointed as postmaster by President John Quincy Adams in 1804. He was offered a Court Officer position in New Bedford, relocated here and thus starts the local Washburn legacy. In addition to his service as a Court Officer, James was part of a committee formed in 1814 to deal with the influx of privateers in New Bedford harbor that threatened the safety of the citizens. Alas, I couldn’t find much more in the historical record about James’ descendants.

Another descendant of the original John Washburn was Bridgewater’s Marsena Washburn who arrived in New Bedford in 1820. A housewright (and shop owner) and mechanic by trade, he married Lucy Gifford in 1823 and had five children. Their only son Frederic was a true “born and raised” New Bedford citizen. He started as a messenger for Merchant’s Bank on 50 North Water Street before rising in the ranks and becoming a cashier, then 2nd Clerk.

After two decades of service there he became the assistant treasurer of the New Bedford Institution for Savings, which capacity he served in for 37 years. Frederic was very community and social minded and was quite busy in local endeavors. He was a member of the board of trustees for the Fourth Street Episcopal and Trinitarian churches, served as deacon and senior deacon, and was a superintendent of their bible schools. He also helped get the YMCA off the ground as its treasurer and president. Frederic also served as treasurer at Tabor Academy and the Washburn Hall or Dormitory built in 1905 was dedicated in his honor.

Based on his social status, community service, membership in various churches and lodges, and association with the YMCA and Tabor Academy it is my opinion that Washburn street was named after Frederic Washburn. Which Washburn do you think it was named after?

Other notable Washburns in New Bedford include:

When Joe isn't writing, he's coaching people to punch each other in the face. He enjoys ancient cultures, dead and living languages, cooking, benching 999#s, and saving the elderly, babies and puppies from burning buildings. While he enjoys long walks on the beach, he will not be your alarm clock, because he's no ding-a-ling.
Previous Massachusetts Cultural Council awards $1 million to New Bedford organizations
Next Coastal Wine Trail’s Wine, Cheese and Chocolate Market Guide