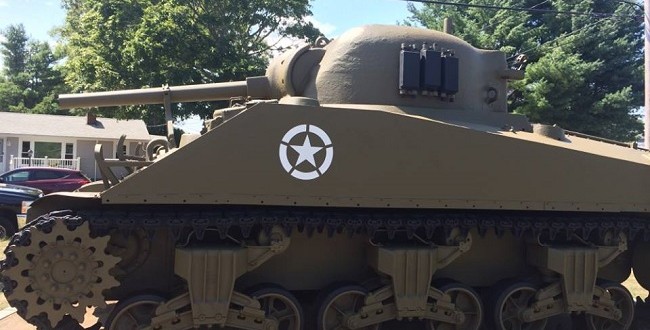 On Saturday morning, the City of New Bedford Veterans’ Advisory Board, the American Legion Post 1 and the US Army Brotherhood of Tankers will gather with Mayor Jon Mitchell, city councilors and family members of Pvt. Norbert A. Papineau to rededicate Papineau Square, 60 years and one day after it was first dedicated. Papineau Square is located in the north end of the city at the intersection of Mount Pleasant Street, New Plainville Road and Tarkiln Hill Road and was first dedicated in September 1956 in memory of New Bedford resident and United States Army Veteran Pvt. Norbert A. Papineau.

Pvt. Norbert A. Papineau was a resident of North Front Street in New Bedford and enlisted in the United States Army on February 10, 1942. He was assigned to the 1st Platoon, C Company 703rd Tank Destroyer Battalion, 3rd Armored Division “Spearhead” and disembarked in France on July 1, 1944.

On February 27, 1945, Papineau’s company was part of Task Force “Yeomans” advancing from Manheim, Germany during what became the Ardennes-Alsace Campaign. The platoon was positioned in the vicinity of Berendorf, Germany where it received enemy artillery fire. An artillery round hit the platoon command post killing Pvt. Papineau and wounding another.

In New Bedford, on September 16, 1956, a square at the intersections of Tarkiln Hill Road, Mt. Pleasant Street, and New Plainville Road was dedicated to his memory and sacrifice by the citizens of the City and sponsored by Post 1 American Legion.

With the support of New Bedford American Legion Post 1, volunteers with the US Army Brotherhood of Tankers (USABOT) organization recently restored the World War II American M4 Sherman Tank that is the centerpiece of Papineau Square. It is the third tank in New Bedford restored by USABOT–the organization previously repainted the tanks at Exercise Tiger Memorial in Fort Taber Park and at the American Veterans’ Memorial Square at the intersection of Mount Pleasant and Nauset Streets and Hathaway Road.

A rededication ceremony is planned to remember Pvt. Papineau and to celebrate the restoration of the military tank on Saturday, September 17, at Papineau Square at 11:00 AM.