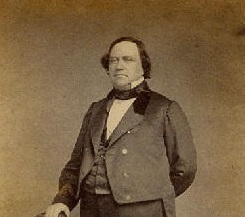 Welcome to next installment in the New Bedford Streets; A Piece of Americana series. Previously we covered William Street, Kempton Street, Middle Street, Centre Street, Ashley Boulevard, Elm Street, Coggeshall Street, and others. If you would like to read those or perhaps revisit them, they can be found by using the search bar to the right. You can also select the “Streets” category.

Rodney French, Born of Quakers
Who hasn’t driven down Rodney French Boulevard? This is another street whose name rolls off the tongue without much in terms of thought. It’s an “everyday” term like shoe, Jeep, or coffee. However, if we stop for a moment, upon reflection most of will come to the realization that we don’t know who the heck Mr. French is!

Now if you are a local historian, you may be saying “How the heck do you not know who Rodney French is?” Don’t go anywhere. Here’s your opportunity to chime in, make corrections, and share!

Unlike some of the other streets, where a rather large portion of time had to be dedicated to researching the origin of a street’s name –Elm Street comes to mind straight away – Rodney French was rather simple and without mystery. I’ll be honest and say that my knowledge of Mr. French did surpass his participation in the historical Stone Fleet during the Civil War. So, I learned some new and interesting facts during my research.

Rodney French was born at Berkeley, Massachusetts in 1802, only 19 short years after the end of the Revolutionary War. He was one of six children born of Quakers Samuel French and Celia Crane. His Quaker upbringing would color his life and influence many of his personal and business decisions. Most particularly, his anti-slavery sentiment which would also present many problems throughout his life.

Abolitionist, Merchant, Mayor
Mr. French was an ambitious, business minded fellow who also held strong political views. Early in life he was a merchant who had ties from New England to North Carolina. There aren’t an awful lot of records to show the exact nature of his businesses, but there is a mention that he owned a Chandler Shop with partner Charles D. Burt at Hillman Street.

Interestingly, at this time in New Bedford’s history Hillman was directly on the waterfront and the shop was literally built above the water so that the tide ebbed and flowed under it. This would have been where Route 18 is today in front of the mural bedecked West Terminal.

His successes and failures were apparently measured in extremes. He failed enough to have it said in 1856 that he “owed everybody” according to the R.G. Dun & Co. who interestingly also described him as a “ranting politician.”

However, his businesses were lucrative enough for him to possess land and whaling vessels. Whether he wisely “squirreled” away money to ride the waves of failure and successes, eventually learned enough to keep an even financial keel or just got plain lucky, he never experienced hardships or poverty and did well for himself. Enough to allow him to finance and run for political office – in this case mayor-ship in 1853 – and win. He would become the city’s third mayor and served one term.

Though not initially anti-slavery, Quakers had adopted the stance by the time French was born. While it was a sentiment and personal view of his, it became a political issue after seeing a slave auction and children being ripped from their parent’s grasp to be separated for life. Witnessing this auction left a deep, indelible impression.

Free-Soiler and Black Republican
French was a Free-Soiler – a pre-Civil War political party that opposed slavery and the admission of slave states into the Union. His actual political affiliation is dubious. I have come across documents that state he was a Democrat and others that state he was a Republican. We do know that he was a delegate to Republican National Convention from Massachusetts in 1856 and that he was considered a “Black” Republican because of his anti-slavery or abolitionist platform.

His anti-slavery stance did not make him very popular among his peers and the aristocrats of society. In fact, this put his career and life in harm’s way often. He lost many a business relationship and opportunity, surely including revenue, and especially in pro-slavery North Carolina.

Here’s where we need to take a short, slight digression to establish a relevant point: at this time – late 1850s – what would eventually be dubbed Rodney French Boulevard was called “Point Road.” Andrew Robeson who was the son-in-law of whaling and textile mogul Samuel Rodman came up with idea of turning the road into an avenue in honor of the city’s third mayor – and to the ire of his political opponents and the city aristocracy. Point Road became French Avenue. It wouldn’t until some time circa 1899 that it then would be renamed Rodney French Boulevard.

You may be asking “Street, Avenue, Boulevard. Same difference, right?” Many people think Street, Avenue and Boulevard are synonymous terms, but there are distinct differences. An avenue can be said to be a street that graduated. An avenue is a street that gets trees placed along its length and is widened into two lanes. It’s a way of saying “Hey, this is a special street.”

A Boulevard can be said to be an avenue that graduates. It gets further widened to allow parking, gets additional landscaping, and even lanes for pedestrians and bicyclists. It’s a way of saying “Hey, this street is so special, we want you to pull over and stroll.”

The Civil War’s Stone Fleet; Of Fiji Ports and Quaker Guns
Leading up to the Civil War (1861-1865) he played an active role in the Underground Railroad freeing hundreds of slaves. In addition, French campaigned heavily for local African-Americans who wanted a military presence in the battle.

He fought to allow blacks to enlist and fight and even encouraged them to go ahead and commence drilling, since he felt it inevitable that the government would fold and allow their presence.

During the war, French donated his time, status, and resources to play an active role in spite of the Quaker’s view of non-violence and stance against refusing to participate in war. He may not have played so prominent a role and continued to simply campaign and advocate anti-slavery from a political pulpit if it weren’t for the fact that Confederate ships raided and destroyed whaling vessels on a regular basis. This had a harsh effect on French’s business interests and bottom line. Don’t mess with a man’s moola!

On November 2, 1861, French sailed aboard the 243 tonnage vessel Garland (containing 190 tons of stone) with the historic stone fleet which was a combination retaliation and tactical move to adversely affect the South’s ability to ship and receive freight on its waterfront. This stone fleet and its second one, both allowed the North more manufacturing time to build more gunboats for the cause.

Commodore of the Stone Fleet, Rodney French
French gave himself the title “Commodore” in an candid anecdote. Upon arrival in Savannah Harbor, French ordered a cannon fired. Though there were some ships fitted with weapons, most where junks and old whalers. Those without firepower had Fiji Ports and Quaker guns. Fiji Ports were simply paintings of cannons, which at a considerable distance appeared to be the real thing. Quaker guns where false cannons carved out of logs to also give the appearance of the real thing.

An unnamed naval officer that was present demanded to know who gave an order to fire. French declared “Commodore of the stone fleet, Rodney French.” To which the officer replied “There is only one Commodore in these waters, and he is Flag Officer DuPont of the South Atlantic Blockading Squadron. Don’t fire that gun again!”

Posthumously
Not much more is said about Rodney French’s life after the Civil War beyond his passing in 1886. Before his death African-American citizens collected dimes and quarters to melt down and have a silver pitcher and tray as a symbolic way to show their gratitude.

After his passing, local African-American citizenry in 1924 again showed their gratitude by having a monument and plaque dedicated to his honor in Hazelwood Park.

Sadly, in 1983 the plaque was stolen. It would be forgotten for six years before students of both Keith and Normandin Junior High Schools campaigned under the leadership of teachers Donna Parker and Kevin Bellavance respectively, to have it replaced. After lobbying City Council and Mayor Bullard, a ceremony was held he following year and a new plaque was installed at the cost of $925 which was paid for by the N.B. Chapter of the National Association for the Advancement of Colored People.

An important figure in New Bedford and the nation’s history that should not be forgotten and certainly deserves even more than having a Boulevard, plaque and monument in his honor, is Commodore Rodney French.

When Joe isn't writing, he's coaching people to punch each other in the face. He enjoys ancient cultures, dead and living languages, cooking, benching 999#s, and saving the elderly, babies and puppies from burning buildings. While he enjoys long walks on the beach, he will not be your alarm clock, because he's no ding-a-ling.
Previous Help Wanted: Full-time Coordinator at YouthBuild New Bedford
Next Troop 7 New Bedford has teamed up with Emma Jean’s to sponsor a Thanksgiving Pie Fundraiser!