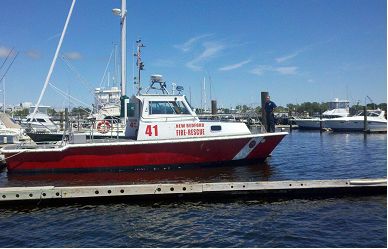 At a press conference today on the New Bedford waterfront, Mayor Mitchell and Chief Michael Gomes of the New Bedford Fire Department unveiled a 41-foot fire rescue boat which the City received at no cost through a federal excess property program administered through the U.S. Forestry Service and the Massachusetts Department of Conservation & Recreation Bureau of Forestry and Fire Control.

“At a time when City finances are tight, the acquisition of this vessel at no cost to the City is exactly the kind of creative and fiscally prudent approach we need. This boat will equip our firefighters with the tools they need to respond to emergencies on the waterfront and improve the department’s ability to protect our valuable infrastructure throughout the port,” said Mayor Jon Mitchell.

The 1978 41-foot rescue boat acquired through the FEPP by the New Bedford Fire Department will enable the department to better respond to emergencies in the busy commercial and recreational port of New Bedford. The rugged, seaworthy vessel, a former United States Coast Guard Utility Boat, was originally designed for USCG use on a variety of missions. The boat is welded aluminum, with a molded fiberglass superstructure and is outfitted with twin Cummins diesel engines with conventional shafts and propellers. The UTB boat was considered the work horse of the U.S. Coast Guard and was the primary search and rescue craft for coastal operations. The rescue boat also has the ability to tow vessels of up to 100 tons and 80 feet in length. This new asset will give the NBFD an increased ability to respond to emergencies in seas of up to 8 feet.

New Bedford Fire Chief Michael Gomes said the department has names the fire rescue boat for Edward C. Spooner Mr. Spooner, the first New Bedford firefighter to die in the line of duty in 1890. “While the boat itself came free, we also did our best to secure donations, in-kind services and the assistance of the Engineering Department at Coast Guard Station Woods Hole, the New Bedford Fire Department so the cost to make the boat operational was less than $4,000.00,” said Chief Gomes.