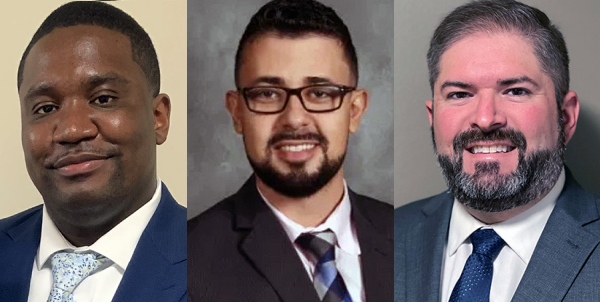 New Bedford Public Schools welcomes three new principals for the 2022-2023 school year at Carney Academy, Ashley and DeValles Elementary Schools, Superintendent Thomas Anderson announced publicly yesterday and said that, “it is always exciting to welcome new team members into such important roles.” The three were introduced at the June 13 meeting of the New Bedford School Committee.

Mr. Daniel Mckoy, Sgt. William H. Carney Memorial Academy Principal, starts on July 1, 2022. Mr. Mckoy joins the Carney Academy community from Boston Public Schools, where he has served in multiple capacities including a Grade Team Leader, classroom educator, and Principal. Mr. Mckoy states, “My core belief is that all students no matter how they look or where they are from deserve educators that have high expectations in them. Educators that believe in their innate ability to achieve academic success and to be valuable contributors to our future society. I’m grateful today that I had educators in my life that represented these beliefs when I was a struggling student and my mission and dream is to be that representation for all of the children and families that I serve.”

Dr. Mario Pires, John B. DeValles Elementary School Principal, starts on July 18, 2022. Dr. Pires joins the DeValles School community from Boston Public Schools where he has served as the Assistant Head of School for the last six years. Prior to that Dr. Pires’ previous roles included being a Content Instructional Leader and educator in New Bedford Public Schools, and a visiting lecturer at Bridgewater State University. Dr. Pires states he is “excited to return home to serve students, educators, families, and community members. I look forward to leading as the Principal of the DeValles Elementary School and increasing access to educational opportunities so that all brilliant New Bedford scholars can shine.”

Mr. Mark Souza, Charles S. Ashley Elementary School Principal, starts his new role on July 1, 2022. Mr. Souza joins the Ashley Elementary School community after serving as an Assistant Principal at Normandin Middle School for the last four years. Prior to that Mr. Souza served as an Assistant Principal and an elementary school educator with Carver Public Schools and New Bedford Public Schools. Mr. Souza states, “I am honored and excited for the opportunity to serve as Principal at Ashley School. I look forward to working with our amazing students, staff, and community to continue to develop kind, curious, and thankful learners.”

Superintendent Anderson expressed sincere appreciation to the schools’ outgoing principals, for their dedicated service to the students and staff at their schools.

In the coming weeks, the new principals will announce opportunities to join them at their respective schools to meet and greet their students, staff and families.