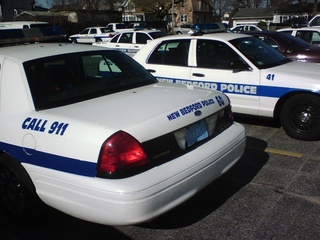 In a press conference today New Bedford Police Chief David A. Provencher and Mayor Jon Mitchell announced the recovery of a police-issue AR-15 assault rifle and thirty rounds of ammunition which were recently stolen from the trunk of a unmarked police vehicle that was parked in the driveway of an officer’s home. Full details on the theft here.

The recovery comes after an intense two-week search in which New Bedford Police enlisted assistance from a range of federal, state, and local law enforcement agencies. The additional supported proved crucial as the Fairhaven Police Department received key information which lead to the recovery.

“I promised that we’d leave no stone left unturned, and that’s exactly what the men and women of this Department did. We also owe a debt of gratitude to our law enforcement partners in Fairhaven, Acushnet, and at other agencies. Without them we might not have achieved such a positive outcome.”

New Bedford Mayor Jon Mitchell praised the Police Department’s professionalism, “Residents of New Bedford can breathe a lot easier knowing, not only that this weapon is off the streets, but that we have a talented police force that reacts effectively when it finds itself in difficult circumstances and rises to the occasion. The recovery of this dangerous weapon is the product of good old-fashioned police work.”

“Over the last 2 weeks New Bedford Detectives had been following leads and tips from the public regarding a stolen AR-15 patrol rifle from an unmarked detectives vehicle.  Last night Fairhaven and Acushnet Police received information about a rifle that was being moved about in the streets. This led to a wooded area on Pembroke Avenue in Acushnet, MA.  After searching for several hours the rifle was recovered wrapped in a canvas bag and slightly buried. Also recovered were two loaded feeding devices, one with 20 rounds and one with 30 rounds. All the rounds are accounted for.

Two males have been arrested and will be arraigned this morning in New Bedford District Court.  The investigation is quite active and more arrests are anticipated.