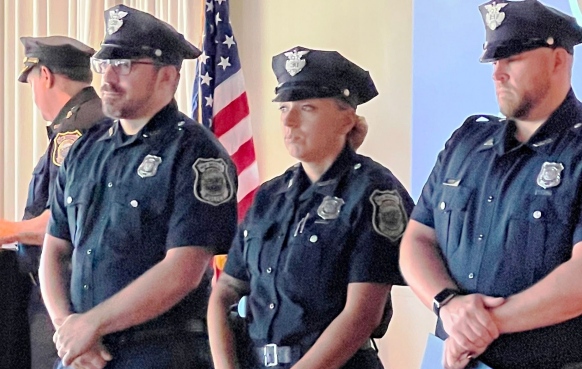 Friday, September 2nd was a proud day for the New Bedford Police Department. We celebrated the promotions of:

We also gave the following awards to their deserving recipients:

For their outstanding bravery on April 11th, 2022, when responding to a house fire at 34 Sydney St., during which the officers breached the residence and evacuated 5 adults, 1 baby, and several pets, at great risk to themselves and without the benefit of fire-safety equipment, they are awarded the Chief’s Life-Saving Award.

For their outstanding bravery on July 19th, 2022, when responding to a structure fire at the Roosevelt apartments, during which the officers entered the building, and methodically evacuated the tenants (several of whom were of advanced age and had to be physically carried over their shoulders), with little regard for their own safety, they are awarded the Chief’s Life-Saving Award.

For his dedication to drug investigation and interdiction which culminated in a joint operation with the DEA known as “Operation Dirty Water”, which lead to the seizure of 15 kilos of Fentanyl, $90k in cash, a luxury vehicle, and the arrest of 10 drug traffickers who now face charges in the federal justice system, he is awarded the Chief’s award for Honorable Service.

Congratulations to all of our promotions and award recipients!” -New Bedford Police Department.

All photos by the New Bedford Police Department: