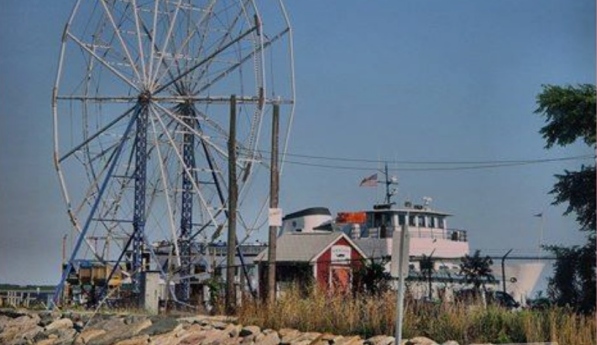 “Things have changed so much from when I was a kid down here in the south end of New Bedford growing up on Bellevue St. All us kids were always doing something with everything available to us.

We played Little League Baseball and I played for ‘Me & Ed’s.’ My friend Mike Pimental’s father and his Uncle Carl Pimental owned the restaurant. Later Carl bought ‘Smuggler’s Den’ if I recall, and it became ‘Billy Wood’s Wharf.’

Back then it was called Clegg Field, home of the South End Broncos. The old concrete grandstand was on Brock Avenue at Lot 13 and we played chicken walking across the very top ledge.

We played football and when winter came we couldn’t wait for the pond to freeze so we could skate and play hockey. I can still remember the smell of the burning wood in the fireplace in the warming house and the light pole in the center of the pond hurt like hell when you skated into it, lol.

We played until it got too dark to see the puck after the light went off around 9:00 pm, if I recall correctly. We were always outdoors year-round. We were always doing something whether it was that, playing basketball at Hazelwood Park, or staying in our room – a punishment we hated and our parents knew it.

These days it’s hard to get Little League teams together because not enough kids are interested in playing. Not sure if the Pop Warner Football teams are around anymore, and that pond has been abandoned for many years with no interest in skating. I took my daughters there a long time ago for a circus and I sat there remembering how where the acts were performing I played hockey with my friends.

When I do on occasion see any small group of kids around here they are staring at their phones and have no idea what they are missing out on.

Like I said, for us having to stay in our room was what our parents did to punish us but these days to punish a kid you have to walk in their room and shut off their video game and computer and take their phone and make them go outside and play.

And I also remember the Clyde Beatty Cole Brothers’ Circus coming to town and the parade with their convoy of trucks and guys riding elephants coming down Brock Avenue to set up their tents at Lot 13 and we would watch them use the elephants to pull the ropes to get the tent poles up.

So much has changed down here in this area from how it used to be once upon a time.

I get carried away with memories sometimes and don’t mean to bore you but I will go further by saying how I remember the old men Bowling On The Green at Hazelwood Park and at night with the lights on and across the street was the Belmont Club where some bikers called the ‘Gypsey Jokers’ would hang out.” -Gomez Munster.