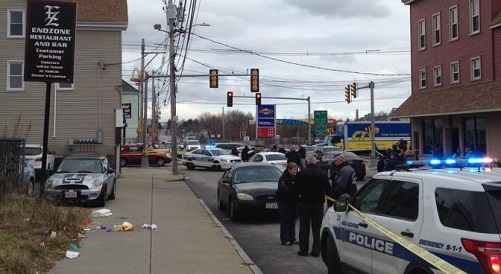 Bristol County District Attorney Tom Quinn announced this morning that an arrest has been made in connection to the Thursday afternoon homicide of 36-year-old Javon Brown in the City of New Bedford.

District Attorney Quinn announced that Jason Valliere, 36, of 84 Fredericks Street, New Bedford, has been charged with accessory to murder-after the fact. Mr. Valliere will be arraigned Monday morning in New Bedford District Court. Investigators were rapidly able to gather enough evidence to obtain a warrant for Mr. Valliere’s arrest less than 12 hours after the homicide occurred. Police have been actively seeking Mr. Valliere since Thursday evening. He was arrested, without incident, late Friday night after coming to the New Bedford Police Station.

New Bedford Police, Massachusetts State Police Detectives assigned to this office and Homicide Unit prosecutors continue to actively investigate the homicide this weekend, and no further information can be disseminated about the facts of the case or the investigation until Mr. Valliere is arraigned in open court on Monday.

Police received a 911 call regarding a shooting at the MetroPCS cellular phone store at 209 Coggeshall Street around 12:30 p.m. Thursday. Upon arrival, police and rescue personnel located a male shooting victim in the area near the parking lot outside the store. The victim, who resides in Dartmouth, was rushed to St. Luke’s Hospital where he was pronounced dead at 1:12 p.m. Thursday.

Anyone who was in the area of Coggeshall Street and Belleville Avenue between noon and 1 p.m. Thursday and may have seen anything connected to this incident is urged to contact New Bedford Police’s Detectives Division at 508-991-6300. If individuals wish to remain anonymous, they can call New Bedford Police’s anonymous tip line at 508-961-4584, or utilize the district attorney’s anonymous text-a-tip program by either logging on to tipsubmit.com or by texting the phrase “CALL50” to the phone number 274637 (which spells CRIMES).