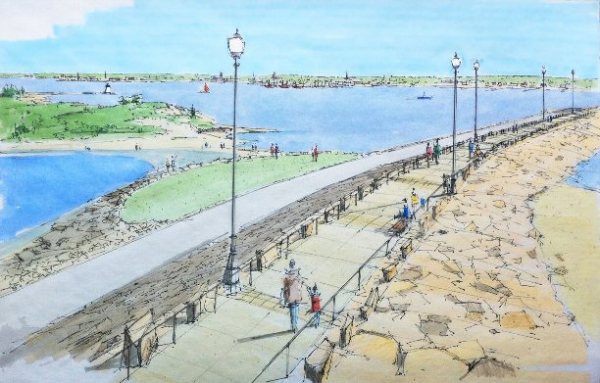 At a press conference in Yarmouth, Massachusetts today, Massachusetts Secretary of Energy and Environmental Affairs Richard K. Sullivan Jr., awarded a Parkland Acquisitions and Renovations for Communities (PARC) grant to the City of New Bedford for the Harborwalk Project—a project to develop a recreational pathway atop the New Bedford Hurricane Barrier that will offer scenic views of Buzzards Bay.

Mayor Jon Mitchell, who attended the ceremony and accepted the PARC grant, explained the project will add a recreational component to the utilitarian stone structure that has protected New Bedford Harbor from surging floodwaters since 1966.

“The Hurricane Barrier has protected our city well for 50 years; today we begin a new chapter in the history of the barrier as a critical public safety asset becomes a cherished recreational jewel for future generations. We are grateful that Governor Patrick and Secretary Sullivan recognize the unique potential of the City’s proposal and granted their support,” said the Mayor.

The City will use the $352,800 to fund the first phase of the Harborwalk Project which will include the installation of a 6,200 foot long walkway with lighting, seating, and hand railings.

At-Large City Councilor Brian Gomes has long advocated for the recreational use of the barrier and Joseph Lopes, Ward Six City Councilor provided a letter of support for the City’s grant application.

Construction of the New Bedford barrier began in 1962 through the cooperation of local, state and federal governments and the U.S. Army Corps of Engineers. The barrier was built across New Bedford Harbor with the goal of greatly minimizing or eliminating the destructive effects of hurricane floodwaters. It has proved its value many times, including most recently in managing tidal surges during Hurricane Sandy.