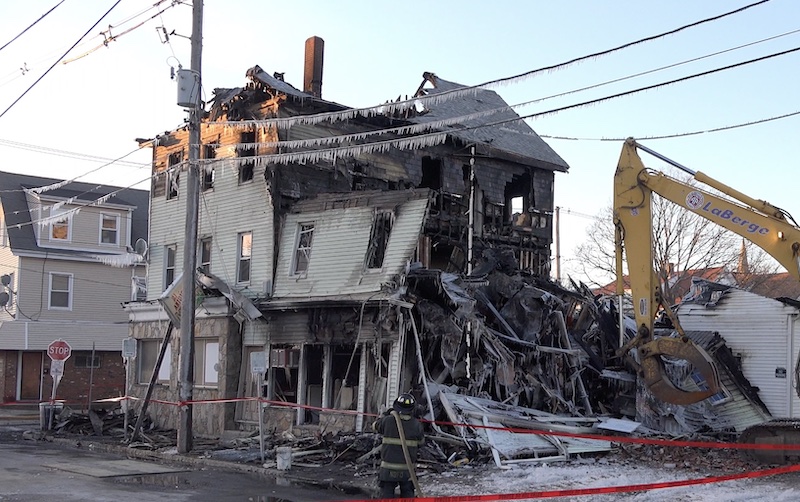 The following was reported by the New Bedford Fire Department regarding the Saturday night fire at 2 Smith Street and the Sunday morning fire at 95 Rivet Street in New Bedford:

Firefighters on Group D were busy battling two separate fires which both occurred on Saturday. The Department is proud of their diligence and skill in battling both of these fires.

The first fire occurred at 1:30 pm in a single-family residence located at 2 Smith Street Court. The fire began on the exterior of the residence and was extending into the interior when crews arrived. Members of Engines 1, 7, 8, along with Ladders 1 and 4 were able to extinguish the fire and prevent further extension into the dwelling. Command Units 1 and 2 also responded to this single alarm fire.

At 1:57 am multiple 911 calls were received reporting a structure fire at 95 Rivet Street. This is a three-story mixed occupancy with a former restaurant located on the first floor with apartments on the second and third floors. There is also a single-story addition in the rear of this structure being used for storage.

Upon arrival, crews located fires on two floors that were rapidly extending throughout the building. First arriving fire companies began conducting interior operations including a primary search for victims as not all of the tenants had been accounted for. After a short time fire conditions deteriorated and with the tenants accounted for, District Chief Robert Mourao ordered crews to exit the building and begin exterior operations. The fire was elevated to a third alarm requiring all six engines and three ladder trucks to operate at the fire scene.

Our thoughts are with the five displaced residents who are victims of this fire. Fortunately, they were awakened by working smoke detectors and were able to safely escape the building. They are receiving assistance from the American Red Cross. Three firefighters suffered injuries, two were transported to St. Luke’s Hospital and released later in the day, and one was treated on scene by NBEMS.

The Department would like to thank NBEMS, NBPD, and NBEMA for their on-scene support. Rehabilitation services were provided by the Providence Canteen and the MA Department of Fire Services. Mutual aid was provided by the Fairhaven, Acushnet, Mattapoisett Fire Departments as well as Dartmouth Fire Districts 1, 2, and 3. Eversource Gas and Electric along with NB DPI assisted at the scene as well.

The cause of this fire remains under investigation by the NBFD Fire Investigation Unit and the MA State Fire Marshals Office.”