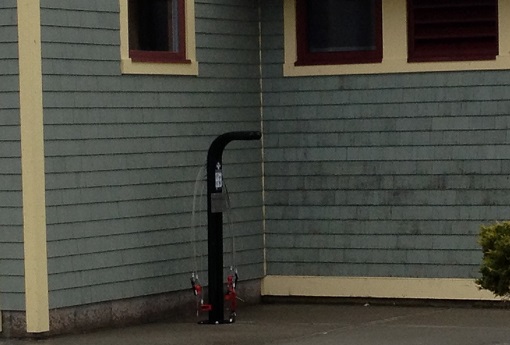 Today, Wednesday, April 23rd at 5:45 p.m., the New Bedford Bicycle Committee will meet in the Fort Taber parking lot in New Bedford’s south end for their first group ride of the season. The ride will be in celebration of the donation of two cycle aid stations by Kim Camara of Yesteryear Cyclery. All area cyclists are invited to participate.

The new cycle aid stations contain tools that allow cyclists to make simple repairs and adjustments to their bicycles while they are out and about.  One station has been installed at Fort Taber and the other will be installed at Wing’s Court in the coming weeks.

“My family has been involved in the bicycle business in New Bedford since 1920 and I felt it would be a nice gesture to “give back” to the area cyclists as well as summer tourists that have so faithfully supported Yesteryear cyclery all these years.  These workstations are designed to be both functional and secure and allow the experienced cyclist a work area do minor repairs “on the fly”.  I sure they will be a great calling card to locals and tourists alike,” said Kim Camara of Yesteryear Cyclery.

The aid stations, valued at about $700 a piece, are permanently installed at each location. While riding, if a cyclist needs to make a quick repair, he or she can use the aid station to prop up the bike and utilize eight common tools to fix any minor problems.

“These cycle aid stations are a major step toward growing New Bedford’s bicycle community. They not only offer cyclists the tools necessary for repairs but also an opportunity to connect with other cyclists, learn from each other and go that extra mile, enriching our local bike culture,” said David Civitarese, Chair of the New Bedford Bicycle Committee.

“I want to thank Kim Camara and Yesteryear for donating the cycle stations in support of the New Bedford Bicycle Committee’s efforts to encourage access to safe, enjoyable riding opportunities for all city residents,” said Mayor Jon Mitchell.  “These cycle aid stations will help riders conduct spur-of-the-moment maintenance and repairs that will keep them riding safely.”

The New Bedford Bicycle Committee formed in 2011 with a goal to connect all of New Bedford by bike paths, allowing for safe and enjoyable riding. The group also advocates for the expansion of 50 miles of bikeway from Providence to Provincetown. The Committee meets the third Wednesday of each month at 6pm in New Bedford City Hall, room 314.

To learn more about the New Bedford Bicycle Committee, visit nbbike.org or massinmotionnewbedford.org.