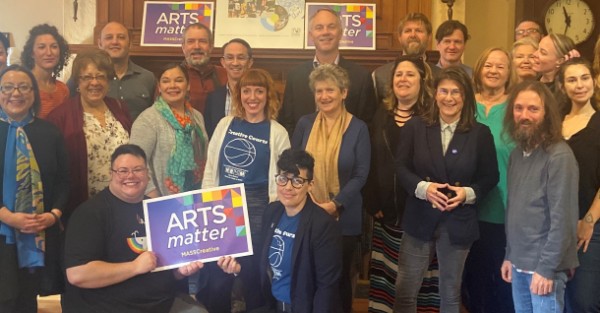 A Creative Courts mural for Carlos Pacheco Elementary School in the West End; high-flying kites and more for Festival Tipico de Guatemala in the North End; and even more Reggae On West Beach in the South End are just three ways Wicked Cool Places are springing up in every neighborhood in New Bedford this year.

Wicked Cool Places is the City of New Bedford’s grant program for creative placemaking. It supports the goals of the city’s first ever Arts and Culture Plan, adopted in 2018. Those goals include enhancing community development, arts entrepreneurship, and ongoing investment in the rich arts and culture of the city.

On Friday, Mayor Jon Mitchell, City officials and members of New Bedford Creative celebrated #ArtsMatterDay in the Commonwealth of Massachusetts by announcing Wicked Cool Places grants totaling $82,000 for local arts and culture projects. In all, 13 projects will receive funding to burnish the city’s appeal as an arts destination and help fulfill the dreams of individual artists. Within 12 months, New Bedford Creative has awarded $132,000 to 25 projects impacting communities and neighborhoods throughout the city. This investment has leveraged an additional $460,000 for the city. 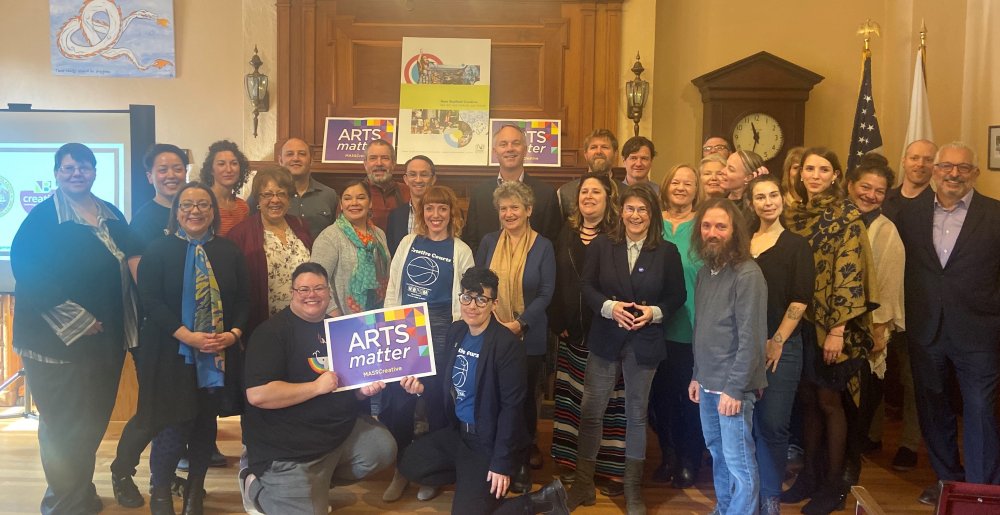 “Not only can we beautify our city with public art, but we can celebrate the community of artists who live and work here. New Bedford has a special relationship with the arts,” said Mayor Mitchell. “Our willingness to embrace and appreciate public art is an important aspect of our city’s identity.”

The City of New Bedford is undergoing a creative placemaking renaissance, supported by Wicked Cool Places and the Arts and Culture Plan, New Bedford Creative: Our Art, Our Culture, Our Future. It is funded by the city of New Bedford’s Arts, Culture and Tourism Fund, with additional support from Bristol County Savings Bank, MassDevelopment, Mass Cultural Council, and the in-kind support of the New Bedford Economic Development Council.

With direction from the New Bedford Creative Consortium, an all-volunteer group of arts leaders and patrons, and operating under the banner of New Bedford Creative (#NBCreative), the 13 projects selected by a task force of the group represent a vibrant cross-section of the artistic energy flowing through the city.

Margo Saulnier, Creative Strategist for New Bedford, said, “The ability to uplift entire neighborhoods through arts and culture placemaking projects like these is a significant step toward fulfilling the goals of the Arts and Culture Plan. It’s thrilling to watch it happen, and satisfying for every resident of New Bedford.”

Beyond the economic impact of this investment, Wicked Cool Places and New Bedford Creative are positioning New Bedford’s rich culture for a sustainable future which will distinguish the city for decades to come. Already recognized as one the most creative small cities in the nation by The Atlantic magazine, its artists, artisans, designers, writers, musicians, and more are boldly charting a future course for this historic seaport community.

As defined by the National Endowment for the Arts in 2010, creative placemaking refers to the process in which “partners from public, private, non-profit, and community sectors strategically shape the physical and social character of a neighborhood, town, city, or region around arts and cultural activities.”

In New Bedford, the goal of Wicked Cool Places is to unite willing property and business owners, cultural and community groups, art and design specialists, and business and development experts to help transform New Bedford’s overlooked or undervalued places.

NewBedfordCreative.org, the organization’s website, states: We believe that there are a lot of Wicked Cool Places in New Bedford, and they are animated by elements that encourage human interaction, from temporary activities such as festivals or outdoor sculpture, to more permanent installations such as murals or lighting design.

“When the energy of arts and culture are a driving force, the possibilities are limitless.”

• 3rd EyE Youth Empowerment for the “3rd EyE Open,” a youth-oriented and family-friendly annual cultural arts festival focusing on the positive energy of hip hop, and “3rd EyE On the Pride,” a monthly performance and mentoring opportunity for emerging young performers.

• In June of 2019, AHA! (Art, History, & Architecture) hosted its first-ever Pride-themed event in conjunction with LGBTQ+ Pride Month, and 2020 will continue this nationwide theme, a chance to recognize and celebrate the contributions of LGBTQ+ people in the city historically and today.

• Coastal Foodshed is celebrating food and art on a monthly basis throughout the winter season at their Indoor New Bedford Farmers Markets. They will be hosting “Palate to Palette: Art at the Farmers Market,” a free event that will transform their market into an edible canvas. Using ingredients from the vendors as the medium, an artist will create an edible canvas, working with the public to build upon their own palates.

• Artist Alexander Jardin for the Haskell Jardin Garden and Sculpture, a green-space making project at Allan C. Haskell Public Gardens, owned and maintained by The Trustees of Reservations. The project explores the merging of landscape design as contemporary fine art, and the installation acts as a metaphor for the jewel of a green-space within a dynamic, maritime rich, coastal-urban, environment.

• New Bedford Art Museum/ArtWorks! for Creative Courts, revitalizing a public basketball court at the Carlos Pacheco Elementary School. This transformative art mural-style court project is led by artist Maria Molteni, who engages with the community, covering a wide range of artistic genres as a point of inspiration and feedback for an impactful design that conveys basketball’s broad appeal and the democratic nature of a public court. The location of the basketball court coincides with programs and efforts offered by the Pacheco School and the City of New Bedford in surrounding neighborhoods, like Presidential Heights and Brickenwood Housing.

• New Bedford Folk Festival celebrates their 25th anniversary year in 2020. Currently presented and produced by the Zeiterion Performing Arts Center (The Z), the two day festival features 7 stages of nearly 100 folk artists, and over 70 craft vendors juried by festival staff. Thousands of people attend each year, and while some stages are ticketed, most of the festival is free and open to the public.

• Brooke Baptiste for Reggae On West Beach, a free community event that is inclusive, multigenerational, welcoming and family-friendly for all who attend, celebrating the many different styles of reggae, world music, modern, and more. The event takes place on West Beach in the South End of New Bedford on several Sundays throughout the summer from 3pm-7pm and features food trucks, local vendors, and free kids’ activities.

• South Coast LGBTQ Network is encouraging everyone to “Show Your Pride” during June, National Pride Month with the Pride Art Expo at Gallery X and “Art in the Park,” their 4th annual South Coast Pride all-inclusive community event in Buttonwood Park.

• Superflat NB is a creative placemaking, mural art project dedicated to beautifying New Bedford while flattening barriers to the arts. This project will create a gallery of murals along Purchase Street across from the Greater New Bedford Community Health Center. It will consist of an eclectic mix of imagery from talented local artists while preserving the art that exists. Showcasing a “postcard” style mural with the words “New Bedford” depicted in graphic lettering with each letter containing imagery painted by separate local artists. The existing TomBob “robot” will remain and be incorporated into the new mural.

Coastal Foodshed for Palate to Palette: Art at the Farmers Market: $8,500