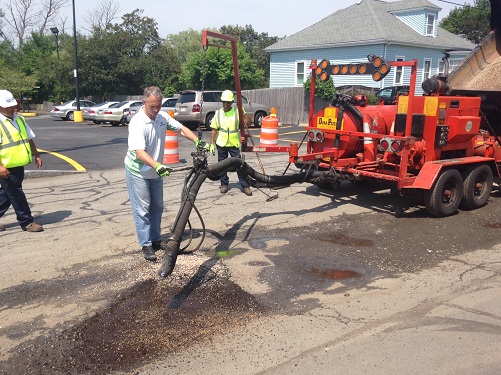 The winter months of 2014-2015 were particularly harsh in New England as heavy snowfall and frigid temperatures plagued the region. Weather experts called it the third snowiest winter on record for New Bedford with more than six and a half feet of snow dumped on the city. The severe winter took a toll on roadways throughout New England and in New Bedford. While the snow melted long ago, crews from the City of New Bedford Department of Public Infrastructure (DPI) have been working diligently since March to repair potholes citywide.

Today, Mayor Jon Mitchell praised City employees for tackling the pothole problem with force and reaching a significant milestone: DPI crews have repaired 10,000 potholes since March. According to a recent report by the New England Center for Investigative Reporting, the City of New Bedford repaired more potholes than the City of Boston during the same time frame. Boston has more than three times as many miles of roadway and a significantly larger number of employees than the City of New Bedford Department of Public Infrastructure.

While Mayor Mitchell acknowledged the progress made thus far, he pledged the City of New Bedford would continue to work to fill every pothole reported. He encouraged the public to be part of the City’s effort to address potholes, “With more than 10,000 potholes filled, New Bedford has made great headway but the work is not done. DPI crews are committed to addressing every pothole and I want to encourage our residents to help us with this challenge by reporting potholes to the Department of Public Infrastructure at (508) 979-1550.”