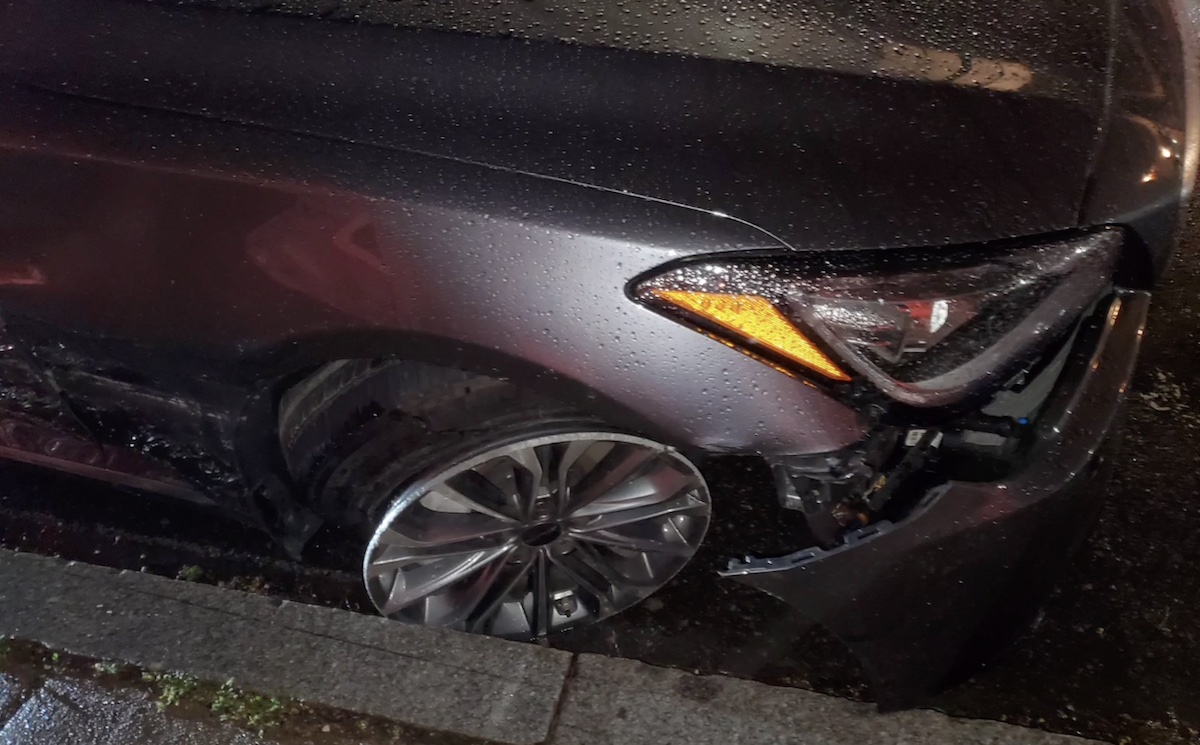 An Incident Report and a Motor Vehicle Crash Report were released Tuesday afternoon by the department. Responding officer Abraham Nazario wrote in the incident report that while “Mr. Dunn seemed confused, shaken and disoriented” the “common indicators and cues that would indicate possible consumption of alcohol were not observed while on scene and at that time.”

The explanation of how the accident occurred is limited, with the crash report noting that “while backing out of a parking spot” Dunn struck the back of a black Chevrolet pickup truck before hitting a granite curb and colliding with the passenger side of a red Toyota Rav 4. The crash report says Dunn “then parked his vehicle on the North side of the lot and waited for police to arrive.”

When Dunn gave a statement to police around midnight on Monday, he said his memory of the accident was “fuzzy” but that he had taken Benadryl for allergies to a new dog.

Dunn stated he remembers hitting the first vehicle, but then “lost it” and struck another vehicle. The report states “he felt disoriented and felt he needed to move his vehicle to a safest spot to try to call the police.”

When asked why he didn’t call the police, Dunn stated he couldn’t find his phone. Responding officers were unable to locate a phone in the car.

When asked where he was coming from or headed to, Dunn stated he was headed home after a late dinner downtown, according to the report.

Nazario’s report begins with a call at 1:23 a.m. for a possible hit-and-run accident. The driver was reported last seen driving toward the YMCA.

When Nazario arrived he found his partner, officer Jesse Branagan, talking with “several males” in the Chevy pickup. They stated they were waiting for a cab and were unaware of the damage to the rear of the vehicle.

According to the incident report, Branagan then located Dunn’s damaged gray Hyundai Genesis near 35 Commercial Street. Dunn was seated in the car. At first, he was unable to give his name, but “eventually” stated it, the report states. When asked where he was, Dunn asked if he could reach for his phone. No phone was found.

“During this short interaction I began to form the opinion that Mr. Dunn could have possibly been injured in some way causing him to be disoriented as such,” Nazario wrote.

Dunn was asked to step out of the car and did so “without staggering or fumbling his gait,” the report says. When asked if he needed medical attention, Dunn said he did, noting his head and neck. Dunn was seated in a police car to wait for paramedics to arrive.

During their interactions, Nazario wrote “Mr. Dunn spoke very little, when he did it was not slurred and at no time was I able to detect or notice any odor slight, moderate or otherwise of any alcoholic beverage coming from his breath or body. There was no excessive sweat observed, no clammy, red flushed skin. No red glassy-bloodshot eyes were observed.”

The report also notes Dunn was not rude or aggressive with officers. They did not take a statement from him at the time “due to his current physical state,” Nazario wrote. Dunn’s car was towed and he was informed he must call or return to make a statement and he agreed to do so.

When giving his statement about 72 hours later, Dunn told the police he had been released from the emergency room around 5 a.m.

Previously, acting police chief Paul Oliveira had released a statement: “As a result of an accident overnight Saturday involving Councilor Hugh Dunn, the NBPD has launched a review of the matter to ensure the incident was handled properly. If anyone has any information on the incident, please contact the NBPD.”