The Federal Bureau of Investigation has sent out a nationwide alert in the hopes of solving the mystery surrounding a Massachusetts woman who vanished in a New Hampshire town in 2004.

The FBI has created a Violent Criminal Apprehension Profile for Maura Murray who was 21-years old at the time of her disappearance on Feb. 9, 2004. The profile which will allow multiple law enforcement agencies to share information regarding the case is a glimmer of hope for friends and family.

Murray was a graduate of Whitman-Hanson Regional High School and was studying nursing at the University of Massachusetts-Amherst when she crashed her car into a snowbank on Route 112 in Haverhill, New Hampshire. Family were unsure why she was so far from home and school and didn’t know what she was doing in New Hampshire.

Her sister, Julie Murray, announced the FBI alert in a Tweet and said: “As we approach the 18th anniversary of Maura’s disappearance, LE notified my family they were releasing an FBI ViCAP profile. The goal is for multiple agencies and jurisdictions to pool and cross-reference info. Long overdue, but a positive step in finding answers #mauramurray.”

The state of New Hampshire never classified her case as criminal, but her sister believes that this is an indicator that investigators haven’t ruled out foul play. 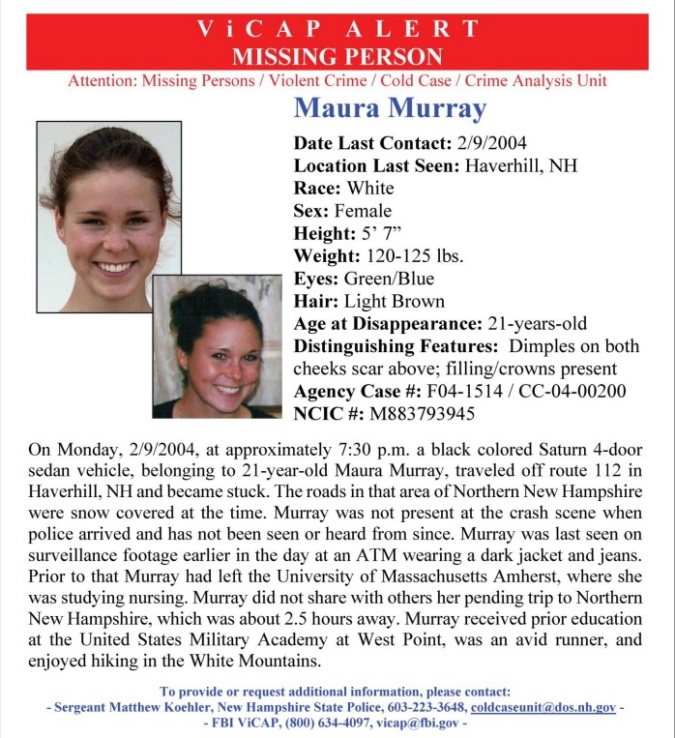