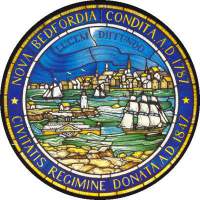 Mayor Jon Mitchell has submitted a letter to the New Bedford City Council requesting that the Council name the vacant city-owned lot known as One Washington Square ‘Tom Lopes Park.’ Mr. Lopes, who died in 2012, was the publisher of the Cape Verdean News and the first Cape Verdean-American to serve in the Massachusetts State Legislature. A beloved figure in the Cape Verdean community and throughout the city, Mr. Lopes was also active in various neighborhood and youth initiatives.

In a letter to the Council the Mayor reports that the Community Leadership Team of NeighborWorks Southern Massachusetts has partnered with WHALE, local artist Erik Durant, and other community members to design and build a memorial sculpture in honor of the late Tom Lopes. The effort grew out of a community engagement process initiated by WHALE and NeighborWorks to redevelop One Washington Square. The process revealed tremendous community support to create the memorial sculpture and to build a small park at One Washington Square at which to site the memorial sculpture. The group had petitioned the Mayor to name the new green space ‘Tom Lopes Park.’

In his letter Mayor Mitchell said, “Given the enormous contributions Mr. Lopes made to New Bedford’s Cape Verdean community and to the city generally, I wholeheartedly support the community’s effort. Mr. Lopez’s impact on the community as the first Cape Verdean-American elected to the Massachusetts House of Representatives, as a journalist and publisher, and as a neighborhood advocate and mentor, is well-known to many of us, but perhaps less so to newcomers to New Bedford and to the younger generations. The park and sculpture at a prominent gateway location will stand as a permanent reminder to present and future residents of our city that one person can truly make a difference.”

City Council Brian K. Gomes, who, through the City Council’s Memorials and Dedications Committee, has spearheaded discussions about establishing a memorial tribute to Mr. Lopes, concurred, “The Cape Verdean community and the entire City of New Bedford owe Tom Lopes a debt of gratitude for all he did for us. Those of us who knew him and worked with him still feel his absence in our city every day. I can’t think of a more fitting tribute to him than to build this statue and name this park in his honor.”

Councilor Dana Rebeiro, who represents Ward 4, where the would-be park is located, added, “Tom Lopes was a true renaissance man and the contributions he made in his lifetime served not only the Cape Verdean community but the entire city. Knowing that family and friends will be able to enjoy Tom Lopes Park is a fitting tribute and hopefully it will inspire someone to continue his very important work.”

Deborah Ramos, the Co-Chair of the NeighborWorks Leadership Team and Mr. Lopez’s sister, expressed her gratitude to Mayor Mitchell for moving the project forward, “On behalf of the Committee and my family, I want to thank the Mayor for embracing our vision for the memorial sculpture and park. He and his staff have supported us from the beginning, and when this plan finally comes to fruition, it will be a triumph of team work and dedication by all involved.”

The park, which is being funded by the City with a Community Development Block Grant, is tentatively slated for construction in the fall of 2015.