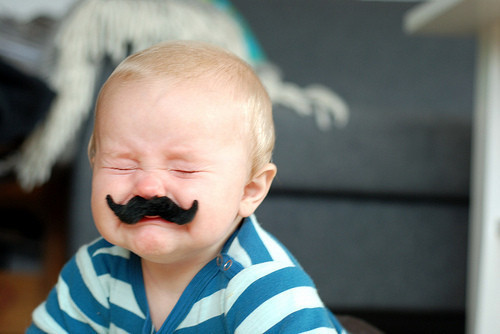 Every spring (with a few exceptions), I travel from Massachusetts to Colorado to visit friends and to hit the slopes in the magnificent Rocky Mountains.  About five years ago on a trip to Breckenridge, I noticed a trend that I really hadn’t seen much of since the 80’s when my father was in his heyday—the moustache. (He had a sweet ‘stache until the mid-nineties or so.)  Men everywhere (and some unfortunate women) were sporting mustaches, and it didn’t seem like such a big deal to them, but it was to me.  I had to find out the reason for this newfound facial treason.

After talking with some of the locals, I found out that this wasn’t just a random occurrence or a strange series of coincidences, but rather a yearly tradition.  Every March, men (mostly in their 20’s and 30’s) grew their upper lip hair into carefully cultivated mustaches, merely for personal enjoyment. They called it “Mustache March.” Some sported the pencil thin look, some used a moderately groomed mustache, while others a more traditional, fuller look. Some were more daring and attempted the Handlebar (see Rollie Fingers), the Fu Manchu (see Hulk Hogan) and even the Horseshoe (often confused with the Handlebar).  And it wasn’t just in Colorado.  I heard it was big in parts of California.  Other ski areas around the country were reporting stashes of ‘staches amongst the population.  To my surprise, it was even big within The United States Air Force. 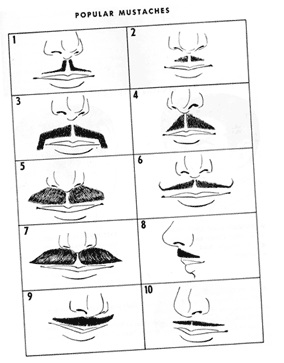 I was taken with what I had witnessed, and suddenly I knew what my face was missing all those years.  I was never a beard guy (too itchy), and sideburns weren’t my thing, but a moustache?  I could handle that!   Plus my dad had one for all those years, so neither he nor the real boss, my mother, could do anything about it (though they tried).

So it was on that ski trip that I began growing out the hair above my lips that would eventually become the very first mustache of my life.  By April, I had one, and a solid one at that, and the pictures are on Facebook to prove it.

That infamous spring came and went, and for one reason or another, I decided to shave the thing off, but the damage had already been done. It was then that I realized that to have a proper mustache was to really know what it felt like to be a man.  Besides, it made my nose hair seem less out of place, and it was a nice, furry little change of pace.  Plus, it was never intended to be a permanent thing, so at the very least, it was a fun experience.

Seasons changed, and once again I found myself counting down the days until the next February where I could start to cultivate my mustache for March.  And so the tradition goes…I now grow a mustache every March, and a few years ago, I noticed that the trend had made its way back east.  I saw that a lot of young men in New England were partaking, and that every recurring March brought some of my friends to become lip-deep in facial hair.  Though I can’t take complete credit (some of the Colorado transplants probably brought it back with them as well), I would like to say that I had some influence on a few of them at least. (I can already hear them vehemently denying this as I write.)

While it did catch on within my inner circle and amongst some others who had caught wind of the tradition some other way, most people didn’t and still don’t understand it. “You have a mustache!” scream female friends when they see me out around town.  Older ladies in my office smile at me when I walk by.  Guys say things like, “nice ‘stache” when they see me, but I know they’re laughing at me on the inside, along with most of the ladies.  There even seems to be an anti-mustache campaign going on, as I often read about people bashing “hipsters” for having “ironic” mustaches.  But for every five haters, there is at least one person who becomes completely infatuated with its existence.  I’ve literally had woman beg me to bring it back.  “Where’s the mustache?” they say. “I want it back.”  They demand me to grow it again.  Same with some men, especially some of the guys at work.  Most of them can’t stop talking about it.  Love it or hate it, I understand.  Generally, it’s not something you see much of anymore, but I feel that you have to have had one to really understand how it feels, inside and out.

From beginning to end, the human responses alone make the process of growing one worthwhile.  A mustache in its early stages isn’t ever a very good look, which is why I got my girlfriend a $90 Edible Arrangement on Valentine’s Day so I could start growing in February without complaints.  And depending on whom you speak with (again, my girlfriend), some might say it’s never a very handsome thing to try, but overall, I consider all my experiments with the mustache to have been successful because of the way it makes ME feel.

I’ve come to find that a mustache can make a man of average handsomeness turn into the top stud on his block, because a man who rocks a mustache is a confident man, and confidence is one of the keys to success in life, whether on the street, in the business world, in the bedroom, or in our everyday lives.

The tradition of Mustache March is believed to have been started by Air Force Brigadier General Robin Olds, a decorated Veteran of Vietnam and World War II.  As the legend goes, the Air Force has always had a strict policy against facial hair, but Olds decided to push the boundaries.  He was a triple-ace, meaning that he had at least fifteen head-to-head air victories against other planes in battle. (He had sixteen wins, to be exact.)  Anyways, Olds decided that he would grow a mustache in defiance of the anti-facial hair policy, basically because he was such a badass that he knew he could get away with it.

Eventually, Olds was forced to shave his mustache when he moved up in the Air Force after retiring from his famously successful fighter pilot position.  Apparently, he never got higher than Brigadier General because of his general brashness, insubordination, and drinking habits, though he was viewed as the top winged commander of the Vietnam War.  Nonetheless, he had made his mark in the air and also the upper lip of the men of the Air Force.  Many of his comrades had begun to imitate him, and a tradition was started that lasts to this day. Olds paved the way for “Mustache March,” the yearly tradition within the Air Force where men grow mustaches in friendly protest of the rules.

Nowadays, it seems that the Air Force’s tradition has spread into civilian culture.  Mustache March has taken off, and though it is not insanely popular, it is showing up all over the place.

There are commercials on national television for the chain Buffalo Wild Wings that campaign for “more March,” where the main character is a man in his twenty’s with a mustache that seems way out of place on him.  There are parties all over the country aimed strictly at celebrating the sacred ‘stache. The website www.mustachemarch.com is devoted to raising money for charity in the name of the mustache (their slogan is “just grow it,” and the movement has even inspired a the copycat “Movember,” where men grow their beards for charity).  Yahoo.com even recently reported that The American Mustache Institute (AMI) is planning a “Million Mustache March” on the nation’s capital, part of an ongoing campaign to convince lawmakers to create government incentives to grow facial hair.  Who knew there was such a thing as the American Mustache Institute, never mind people who want to be reimbursed for growing one?  And at what cost!

It seems that the mustache has made its resurgence.  I’d like to think so, at least.  Never did I think that I’d write a four-plus page story on mustaches, but now that I did, I’m happy with myself.   I’m happy that I learned about the origins of Mustache March, and who Robin Olds was because I googled those keywords.  I’m happy that I learned that this isn’t just going on in Colorado or amongst my friends, but rather that it’s a nationwide event of sorts.  And I’m happy that I took a shot on writing about something that no one probably really cares about, except me and the AMI’s hopeful million or so that plan on “marching” to D.C.  And even though that’s highly unlikely, and even though the people like to snicker and smile, I’ve had a great time the last five or so Marches, and I plan on bringing it back again next year, barring any growing issues.  Hopefully I can be an inspiration to a whole new generation of growers and showers, as well as to be a leader in the fight against the anti-mustache movements that seem to be taking place.

“To each his own mustache.” – Myself