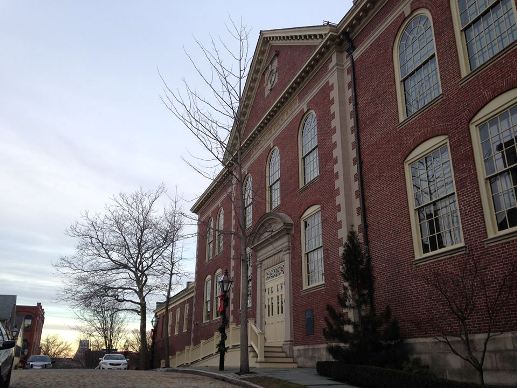 In January of 2013, my husband and I moved from Knoxville, TN to Taunton, MA for employment reasons. Roughly one year later, we moved into our first home on Shawmut Avenue in New Bedford. I had lived most of my life in Knoxville area, attending college, becoming an editor of a literary journal, and eventually establishing myself as a writer and poet, but I longed to experience another culture. Some things are what I expected to fall in love with about the area, and other aspects of New England living have come as a shock.

What I already love about living in New Bedford:

#1: The Environment – The coastline is so beautiful, and I’ll never tire of walking around Fort Taber park. The enormous amounts of snow are still a surprise, yet a welcome one. I lived in Kansas City, MO for about a year in my 20s, and the snow looked dirty and ugly within a few hours. Not here! The snow in New Bedford stays crisp white for days! Looking outside of my window is like looking at a snow-covered old-world fairy tale land. The houses in this area are so charming, with their amazing wooden grooves and stately presences.

#2: The People & Culture – After a week of living in our new home, my husband bought a huge flat of wood to burn in our fireplace, which was dumped right on the sidewalk, spilling into the street. Inexperienced home owners that we are, we didn’t even have a wheelbarrow. Within minutes of noticing our back-and-forth hand-carrying struggle, our kind, elderly Portuguese neighbors offered two wheelbarrows for us to use. Our other neighbors have even graciously snow-blowed our sidewalk several times when we were gone for most of the day. I love the Portuguese food and culture that is so rich and vibrant in this area, and Southern hospitality has nothing on the friendliness of the people in the New Bedford community.

What I’m learning to adjust about living in New Bedford:

#1: The Accents – Like visiting a foreign country, I listen keenly to the accents of the people who were born and raised here. The nuances of speech are fascinating, and the phrases are every bit as creative as in the South. I understand the dropping of the “r,” but that’s about it so far!

#2: The Dense Population – The sheer volume of people and traffic is a culture shock all by itself. I’m amazed every time we go anywhere by how many people there are everywhere! I’ve also never lived this close to people unless I was living in an apartment. The best thing about the dense population, however, is that it seems to connect to a wonderful vibe of “live-and-let-live.”

#3: Religion – All of my life I heard about how open-minded the North is because it’s not in the Bible-Belt, but I’m a bit perplexed. I must say that I’ve seen as many churches and proselytizing signs in one section of town as I did in all of Knoxville. This seems to be balanced by signs for Tarot & Psychic readings, but the sociologist in me is still attempting to understand the culture of religion in the area.

What I find difficult about living in New Bedford:

#1: Taxes – Before moving to MA, I had never in my life heard of an excise tax! That one is difficult to swallow, and the property taxes are about twenty times more than my mom pays in TN for her house. Even the state employment taxes are new to me! I also expected better road conditions with all of these taxes!