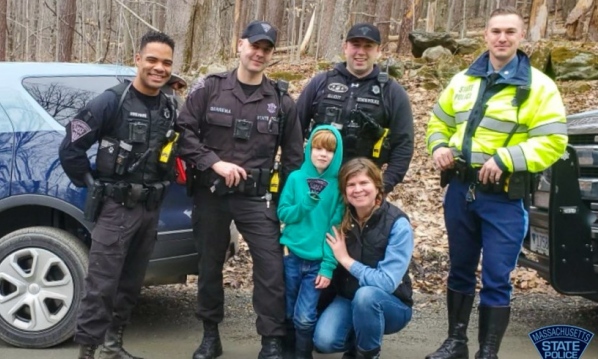 The child had been missing since approximately 8:30 a.m. from an Airbnb house where his family was staying. Patrols from the State Police-Lee Barracks, along with a lieutenant and sergeant from Troop B Headquarters, initially responded to assist Monterey Police and Fire, Great Barrington Police, Williamstown Police, and Pittsfield Police with the search.

State Police K9 teams also responded, as did K9s from Great Barrington and Pittsfield Police. Also responding were Troopers from the State Police Special Emergency Response Team (SERT), which is a group of personnel specially trained in search and rescue operations, including in rural areas or difficult terrain.

At 11:38 a.m. MSP SERT Troopers Dan Fanion and Robert Berrena, along with a local resident who was assisting in the search, located the boy along the wood line behind a home at 68 Fairview Road. The boy was reunited with his parents.” -Massachusetts State Police.