“Some say she can be seen in the window of the Millicent Library at night, even though she has been dead for over one hundred years.”

It’s that time of year again: the leaves are changing to their beautiful yellows and reds, pumpkins are on the doorsteps, and children are excited with thoughts of their Halloween costumes and endless bags of candy.  October also conjures up ghost stories, whether real or fabricated.  South Coast Massachusetts has a rich history of ghost stories, my favorite of which is the story of the Millicent Library in Fairhaven. 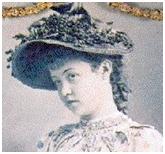 Fairhaven was founded by the famous Standard Oil magnate, Henry Huttleston Rogers.  He had a daughter named Millicent, who died in 1890 at the age of seventeen due to heart failure.  She loved to read and sketch and write poetry.  She told her dad that her wish was for there to be a library in Fairhaven so that all the children would have a place to go to read.

Upon her death, Henry decided to build that library and dedicate it to his beautiful daughter.  He spared no expense as he hired the best architect of the time, Charles Brigham of Boston, and told him to use the best of everything available to build his daughter’s library.  The result was an architectural masterpiece that still stands today.  On January 30, 1893, on the anniversary of Millicent’s birth, the library was dedicated in her honor.

Rumor has it that Millicent is buried beneath the foundation of the library.  Some visitors swear that they have seen her walking the halls, outlined in a bright blue light.  Another woman dressed all in black has been spotted walking along the upstairs hallway, running her hand along the spine of the books.  Some think this could be Millicent’s grandmother, Rhoda, who may not be resting easily. 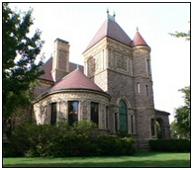 A male ghost is also thought to live in the Millicent Library.  Some staff and patrons have seen a man dressed in a tweed jacket and purple bow tie with round-rimmed glasses mopping the floor in the basement.  The story suggests that he was the janitor who fell on the wet floor and broke his neck, and now his ghost spends eternity mopping the floor.  Others say that he suffered a heart attack upon opening up the library one morning.  Interesting, considering Millicent died of heart failure as well.

The China Room, located in the library, houses several paintings of the Rogers Family.   Children have said that when they talked to the paintings, the expressions on the faces would change.   Also, this room is always dreadfully cold! Doors open and close by themselves and footsteps can be heard on the stairs leading to the basement.

The vault in the basement houses another famous artifact: the hat of Heddy Green.  Heddy, mother to Colonel Green, was said to be a stingy old woman, even though she was one of the richest in the world upon her death.  Some claim to have seen Heddy in the basement after touching her hat.

Aside from all the ghost stories, the Millicent Library is by far one of the most beautiful libraries in Massachusetts.  The architecture, the stained glass, and the spiral staircases are a feast for the eyes.  It lies in the center of town, surrounded by other beautiful buildings, such as the Town Hall and nearby Unitarian church

So if you find yourself in Fairhaven, please visit the Millicent Library.  Whether you want to visit for the books or the ghosts, you will definitely enjoy this wonderful place. After your visit as you drive away, take a look back at the window on the front turret… Millie may be looking back at you too!