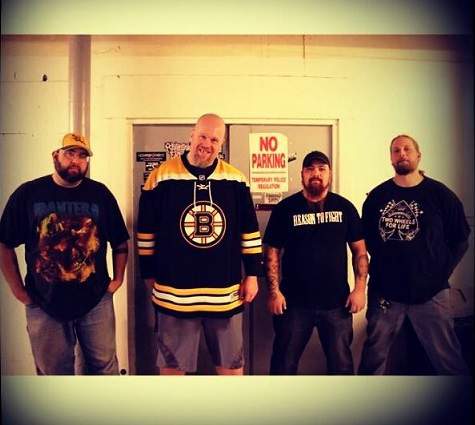 It appears that the metal scene is FINALLY coming back to New Bedford, thanks to Transient Authority and Club XS.

The first metal show was advertised as St. Valentine’s Day Massacre and was held on Valentine’s Day. I figured since we hadn’t been to a local show in over a year, my husband Shannon and I should go to it and support our friends in Possessed Entity, Necris and We Woke the Bears.

Club XS is located on Union Street It is a spacious venue with a VIP area, a nice long bar, and a stage for the bands. Behind the stage is a 13-foot screen on which Transient Authority projects movies.

I asked T.A. how he chooses what film goes onto the screen. “There is a condition called Synesthesia where people ‘see’ sounds as visual. I hear music and sometimes right away I get a film idea. It’s never random.”

T.A. has been projecting at shows for nine years and recently took a year to learn film editing which has helped him create what he calls a “fourth world” (Performance+Music+Film). When I saw this at the St. Valentine’s Day Massacre, I thought it was interesting. You’re there watching the band, but suddenly something happens on film behind them and your head says “What? What was that I just saw?”

Craig Fleming of the band Dead Skies said what T.A. does with film reminds him of Club Babyhead in Providence when that club had TV screens all around the stage.

T.A. has full booking freedom from the owner of X.S. and bands get paid by the door charge. T.A. does his own booking, promotion, fliers, hosting, projection, and sound to keep overhead costs low. He is interested in helping the music scene come back to life in New Bedford and it will happen as long as these bands get support from their fan base.

This Friday April 18, Club XS is having a show with three bands: Mothor, Dead Skies and Teazer. The show is a benefit for the Donovan House, which is a sober transitional housing program for women and their children in New Bedford. Donations of clothes and comfort items are welcome, and prizes will be given to the first 20 people that bring donations. The Southcoast Beard and Mustache Guild will also be there doing a beard and mustache contest, and Maureen Mullaley will have a booth set up selling her recycled guitar string bracelets. All of the guitar strings are donated by these bands that play on stage.

The bracelets are unique and beautiful works of art.

I was able to sit with two of the bands this week: Mothor and Dead Skies. Mothor is Kriss Bliss on guitar, Mario Costa on bass, Mike Cummiskey on drums, and Sonic Nova on vocals. They say their influences include Pentagram, Black Sabbath, Dio, early Judas Priest and early Scorpions. They describe their sound as 70s metal.

Dead Skies is a hardcore band made up of Chris Helme on drums, Shannon Chase on bass, Jeff Scissors on vocals, and Craig Fleming on guitar. Craig and Shannon were present for the discussion.

We talked about how the metal scene has nearly vanished from New Bedford due to venues closing Bands are forced to travel to Worcester and Providence to play, and the New Bedford fans normally just don’t follow.

“There’s no one single place in New Bedford that can take over what New Wave did. New Wave was all original, all the time and they didn’t care how heavy it was, whereas all these clubs in New Bedford that are taking up the music scene will not cater to a death metal or hardcore.” Mario said.

“New Wave had a good following but it took a good three years before they started making a name for themselves and started having those really big nights that we all remember,” Craig said.

“And making a name for themselves as original music, because in the beginning they were letting cover bands play and that was their crowd,” Mario added.

“A definite big part of it is the bands that are playing,” Nova said. “There was more of a scene when Gaskill had a show going on. When there is something worth seeing on stage, people come out. People came out for Beyond the Embrace, Iron Oak, Hidden…”

“It comes in waves,” Craig said. “You’ll have it and it’ll be great. I remember when Gaskill first came out we played the United Fisherman’s Club and had about 300 kids there because there were no metal shows anywhere to be had. Over time, the numbers started to dwindle and once the New Wave opened up and they started having theirs, all those kids that had been going to those shows were old enough to get into the New Wave so they started going to those shows again.”

“I’ve been trying to set up hardcore shows in New Bedford, but venues just don’t want it,” Craig said. “No Problemo is staffed by hardcore people and skateboarders, but the last hardcore show we had ended up in an ambulance call.”

I asked Shannon what he liked most about being in a band.

“The energy and realization that your hard work and your imagination is finally coming fruition to the masses. It is a break from the daily grind of life.”

Chris Helme agreed. “The crowd. If they’re into it, it makes playing worthwhile.”

The hope is that word will get out that these shows at XS are well worth the $5 cover charge because you see more than a band play, you get a true performance!

I used to write a LOT when I was in high school, but after becoming a mom, that part of me ceased to exist unless I was writing a personal letter to a friend. I want to re-awaken that creativity in me. I like to take photographs and ride on the back of my husband Shannon's Harley, go to live metal and hard core shows, and I hit the gym regularly and pretend I am a brontosaurus when I eat salad. I also love Antiques and live smack dab in Eastern central New Bedford!
Previous New Bedford Man Shot in the Back in South End
Next One woman’s candid experience of New Bedford’s public transportation