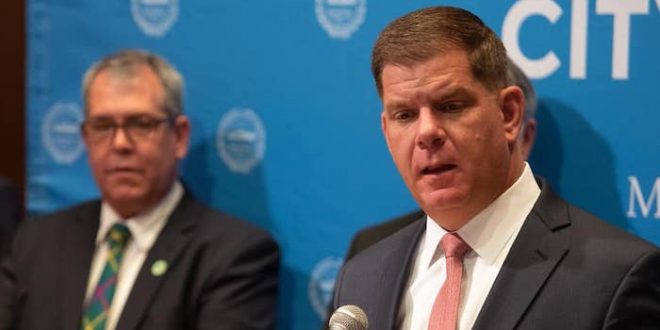 Boston Mayor Martin Walsh defended his decision to cancel Sunday’s St. Patrick’s Day parade in Boston because of the ongoing coronavirus outbreak and said the city’s progress in containing the virus will determine whether the Boston Marathon is run next month.

Walsh scrapped the parade just after the state announced that the number of people in Massachusetts who have tested positive for the coronavirus-caused COVID-19 had climbed to 41, including at least nine in Boston.

“The best way of trying to prevent the spread of it is by not having large groups of people together, particularly that there’s no way to kind of watch what’s going on there,” Walsh said Tuesday morning on WEEI’s Greg Hill Show. “So we have a parade and you have 1.1 million people coming into a neighborhood that it’s very easy, potentially, to spread the virus and it’s pretty dangerous.”

The city’s goal, the mayor said, is to contain the virus and to keep it from spreading outside of known links, like contact with other patients. Walsh said all of Boston’s cases except one are tied to the Biogen executive conference held in Boston last month at which dozens of people became infected. The other positive test came from a young man who had recently returned from China.

The big event coming up on Boston’s calendar is the Boston Marathon, planned for Monday, April 20. Asked whether canceling the marathon is inevitable, Walsh said he’s been talking with race organizers and “it’s a day-at-a-time situation.”

“I’m not saying we’re there yet, I think we have many conversations to happen. It’s about can we do a good enough job as a society to self-contain this where we’re not at a situation where it’s kind of out of our control,” he said.

Though Walsh highlighted the importance of containing the virus, he also told WEEI that he expects the virus to continue its spread.

“I’m expecting that number to grow as we move forward here and this is something that’s going to spread wide potentially,” Walsh said of the number of positive cases in Massachusetts. At another point in the 20-minute interview, he said, “at some point, that number of 41 is going to be bigger and we’re going to know somebody that has coronavirus and when it hits your house it’s going to be a lot more different conversation.”

And if the virus does continue to spread and the marathon is thrown into question, Walsh said he and race organizers at the Boston Athletic Association will consider the cultural, philanthropic and economic impacts of the annual event.

“The economic impact to Boston is in the hundreds of millions of dollars, so everything has to be taken into account,” he said. “The conversation is, if the situation came where the marathon had to be postponed or canceled, do we postpone it? Do we move it to a new day? There are a lot of conversations.”

The BAA said Monday that its leadership “continues to meet and work closely with city and state officials to ensure a safe and successful Boston Marathon … and as local and national developments come to light have been planning under the guidance of health and municipal agencies.”

Asked about the possibility that the Boston Red Sox could hold their home opener on Thursday, April 2 without fans in the Fenway Park grandstands, or the Boston Bruins or Boston Celtics could begin a playoff run without having fans in the crowd to cheer them on, Walsh said those decisions would be made by the leagues.

“There might come a point where our teams are playing with no fans in the auditorium,” he said. “I’m hoping that never comes, that seems to be the worst-case scenario. I don’t think we’re at that point yet.”