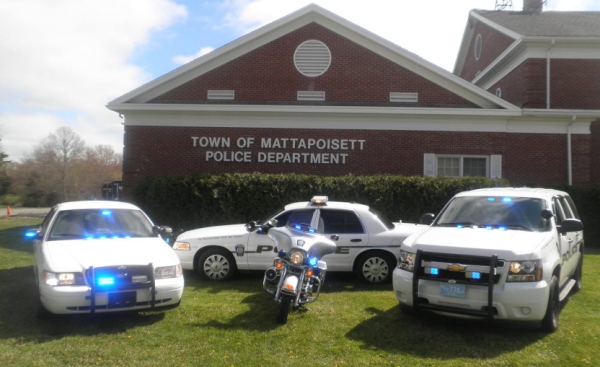 “On Saturday July 02, 2022 the Mattapoisett Police Department arrested Jeffrey Hoskyns, 34 years old, of 357 Coggeshall St in New Bedford, MA and Samantha Amaral, 27 years old, of 227 Warren St in Fall River, MA for breaking and entering into a residence on Rt. 6 in Mattapoisett.

At approximately 7:00PM Mattapoisett Police dispatch received an E911 call for a possible break into a residence. The caller reported that they observed a male get out of a vehicle in their neighbor’s driveway and attempt to gain entry through the front door. The caller then observed the female passenger exit the vehicle and get into the driver’s seat while the male walked to the rear of the residence out of the site of the caller. The female then left the area in the vehicle and was observed parking down the street. At that time the neighbor went over to his neighbor’s house and could hear someone inside.

The neighbor attempted to make contact with the individual, however the suspect ran out the back door and fled in the direction of Brandt Island Rd. Dispatch received an additional E911 call reporting a suspicious white male fitting the suspect’s description walking in and out of driveways on Brandt Island Rd. Dispatch Officer Borges was able to relay the pertinent information in a timely fashion to Sgt. Dumas, Officer Cardoso and Officer Bates as they responded to the scene.

Officer Bates responded to the area of Brandt Island Rd where the suspect was last reported. While checking the area Officer Bates could hear what appeared to be someone in the woods.

After entering the woods Officer Bates located the suspect approximately 20 yards in the woods. Hoskyns was escorted out of the woods and subsequently began resisting arrest. A struggle ensued on the side of the road causing vehicles to stop. With the assistance of a bystander and responding police, Hoskyns was taken into custody.

Subsequent to Hoskyns arrest, the suspect vehicle was located and stopped in Fairhaven by Fairhaven Police. The female operator was identified and transported to the Mattapoisett Police Station.