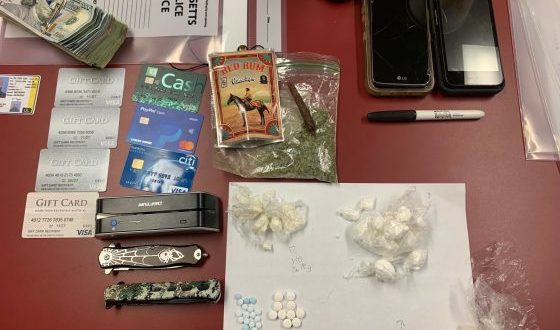 At approximately 8:30 last night Trooper Benjamin Joyal, assigned to SP-Boston, was conducting speed enforcement on Soldiers Field Road in Boston. Around that time he observed a gray Kia Sorento traveling nearly 60 miles per hour, the posted speed limit is 40 mph. Trooper Joyal activated his emergency lights and stopped the vehicle on Harvard Street.

Upon exiting his cruiser Trooper Joyal approached the Kia and identified the operator as CHEURY GOMEZ, 29, of Cambridge. He also detected the odor of freshly burn Marijuana along with multiple signs of impairment in GOMEZ. After several minutes of conversation Trooper Joyal removed GOMEZ from the vehicle in order to conduct field sobriety tests. After GOMEZ was removed Trooper Joyal pat-frisked GOMEZ and located an illegal “switchblade” knife. After the discovery of the knife, GOMEZ began reaching for his leg. Fearing he may have an additional weapon, Tpr Joyal placed GOMEZ in handcuffs and awaited an additional cruiser. Troopers John Dwyer and Edward Hunter arrived to assist a short time later.

After conducting a search of GOMEZ’s pockets troopers discovered 12 baggies of Cocaine, 10 baggies of Crack Cocaine, and multiple baggies containing controlled prescription medication along with over $3100 in cash. Troopers then conducted a search of the vehicle and located a credit card skimming device used to manufacture false documents in the commission of identity fraud and theft. Also located were numerous credit cards and ID’s, not belonging to GOMEZ, forged to bear his photo.

GOMEZ was placed under arrest and transported to SP Boston for booking. A bail clerk ordered him to be held for court. He was arraigned today at Brighton District Court on the following charges: