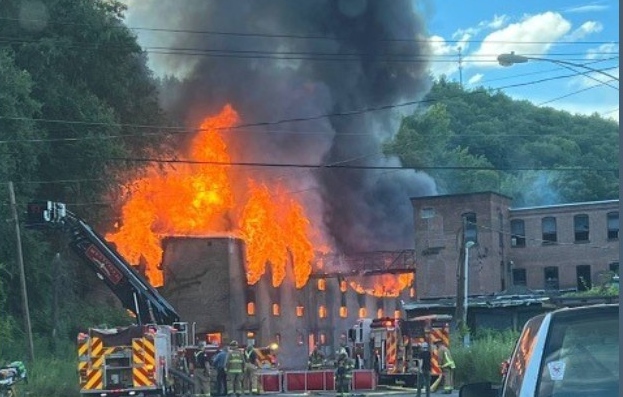 “A massive mill fire in Russell yesterday started when the building’s owner was using an oxygen-acetylene torch near the exterior of the structure, sparking a blaze that spread to a second building across the street, said Russell Fire Chief Edward J. Renauld, Jr., Russell-Montgomery Police Chief Kevin Hennessey, and State Fire Marshal Peter J. Ostroskey.

“I want to thank the men and women of the Russell Fire Department, our mutual aid partners, and local and regional law enforcement for their assistance late into the night,” said Chief Renauld. “Today, I want to remind our residents and businesses that cutting, welding, and other hot work require a permit in advance through the local fire department. Taking that simple step would have ensured adequate safety measures such as a fire watch at the scene and could have saved the property owner from a total loss.”

“The State Fire Code requires a permit for cutting, welding, and other hot work,” said State Fire Marshal Ostroskey. “A fire that started with unpermitted hot work claimed two firefighters’ lives in 2014, and we’re extremely fortunate that no one was injured or worse during this incident.”

The joint investigation by the Russell Fire Department, Russell Police Department, and State Police Fire & Explosion Investigation Unit determined that the fire began at about 4:30 yesterday afternoon in the area of a catwalk between 268 Woronoco Rd. and another mill building across the street. The owner’s use of an oxy-acetylene torch ignited combustible materials. The fire quickly grew to four alarms, consuming the first building and damaging the second. Efforts to suppress the fire were hindered by a lack of water in the area, requiring numerous mutual aid companies as well as a task force to shuttle water to the scene under the Statewide Fire Mobilization Plan.

Though the fire was largely under control by midnight, firefighters continued to manage hot spots at the scene through the day.”-Massachusetts Department of Fire Services.